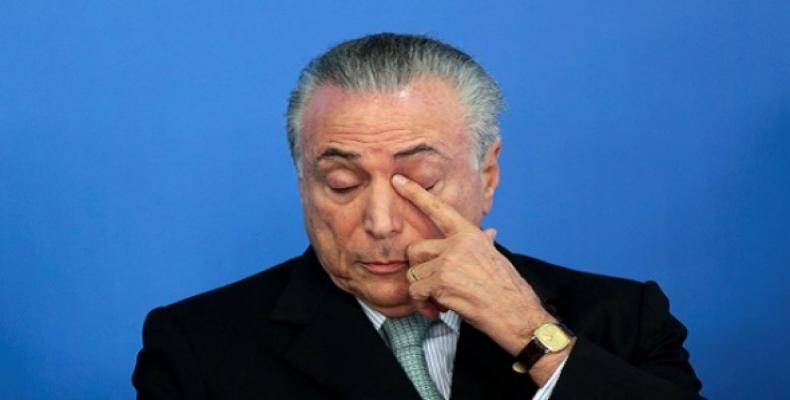 Brasilia, June 9 (RHC)-- Brazil's interim president Michel Temer has been deemed ineligible to run for political office for eight years.  A regional election court in São Paulo issued a formal decree after finding him guilty of spending his own funds on his campaign in excess of what the law allows.  As a result of what the court termed his "dirty record" in elections, according to The Intercept, Temer is unable to be elected to the office he seized with the help of the Brazilian Senate.

Observers said that while this isn't the most serious offense from the interim government -- given how many in Temer's cabinet and Temer himself are mired in allegations of corruption -- it is indicative of the fact that those who led the drive to impeach Brazil's elected president, Dilma Rousseff -- obstensibly over corruption -- are themselves implicated in numerous ongoing corruption investigations.

In just a few weeks since taking over, already two of Temer's ministers in his all-white-male cabinet were forced to resign after it was discovered they had been plotting to obstruct the Car Wash investigation, a scandal involving the state oil company, Petrobras.  So far a third of Temer's cabinet has been implicated in that investigation.