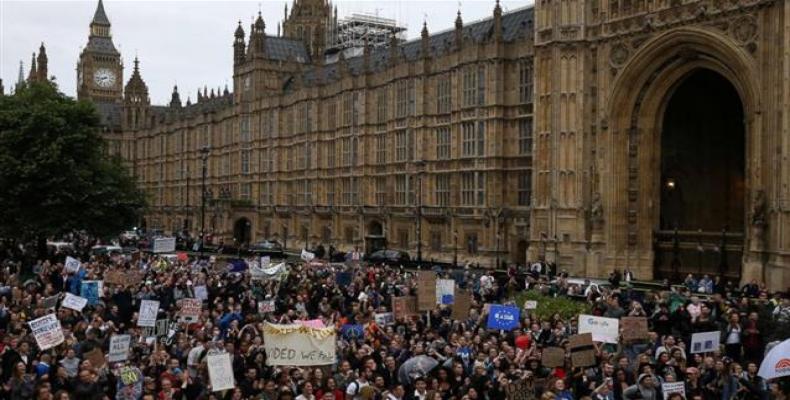 London, June 29 (RHC)-- Hundreds of people across the UK have held demonstrations to protest against Brexit and its supporters following last week’s historic referendum.

In the June 23 referendum, about 52 percent of British voters opted to leave the EU, while roughly 48 percent of the people voted to stay in the union.  More than 17.4 million Britons said the country should leave the bloc, as just over 16.14 million others favored remaining in the EU.

The pro-European Union rally was held even though it had been officially called off over “safety fears.”  Protesters angry at the leading Leave campaigners in the referendum – former London mayor Boris Johnson and Ukip leader Nigel Farage – chanted “Down with Boris” and swore at “Farage.”

"It started with the idea of bringing 20 friends together in London Fields park in East London, and now we have over 50,000 people who want to stand together in London," Jessica Rodgers, an event organizer, wrote on Facebook.

Liberal Democrat leader Tim Farron, who has promised to make the UK a member of the EU again, said the Brexit vote “is reversible.”

More than one million people in Britain have signed a petition to call for a second referendum.  The petition on the British parliament website gathered some 1,130,000 signatures on Saturday less than 24 hours after it was launched.

The result of last week's referendum caused some people who voted for Leave to feel regret and call the electoral services, asking if they could change their decision.