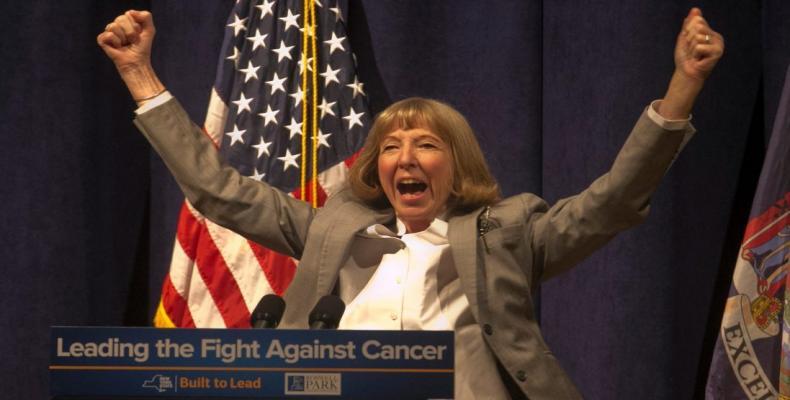 Havana, October 27 (RHC)--  Roswell Park Cancer Institute has received approval from the U.S. Food and Drug Administration (FDA) to conduct an early clinical trial of CIMAvax-EGF, a promising lung cancer vaccine developed in Cuba. This way, the Buffalo-based hospital and research center will become the first such institution in the U.S. to conduct a study on a drug developed by Cuban researchers.

There was plenty of excitement at Roswell Park Cancer Institute Wednesday morning, as President and Chief Executive Officer Candace Johnson made what she called a "historic" announcement that "represents new hope for U.S. patients with lung cancer."

"My God, we did this!  We did this!," Johnson announced to loud applause. She added: "We're the first center to get permission to sponsor the U.S. testing of any Cuban medical therapy, to bring Cuban science to the United States."

Clinical trials are expected to begin in Buffalo in about 30 days. The Cuban vaccine will be offered to as many as 90 patients with advanced lung cancer to determine the optimal dosage and its effectiveness compared to standard therapy for those who have failed previous treatments.

Johnson said Roswell also received authorization from the U.S. Treasury to establish a joint business venture with the Cuban research center that developed CIMAvax, the Havana-based Center for Molecular Immunology. The president of the prestigious cancer research institute said the venture is another first-of-its-kind in the United States, made possible thanks to the reestablishment of U.S.-Cuba diplomatic relations and the first Governor-led trade mission to Cuba by Governor Andrew Cuomo in 2015.

"The potential for this type of approach that Cuba has had with oncologists, who have spent most of our careers with treating people with advanced disease, the marriage between our two intellectual minds here is just so exciting and the promise is great," Johnson said.