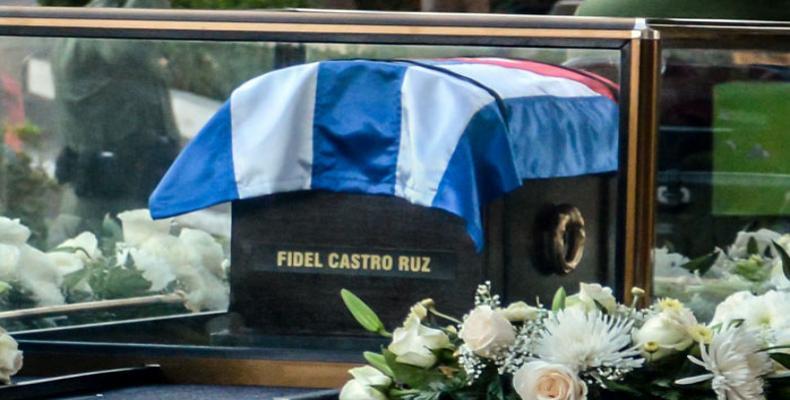 Santiago de Cuba, December 3 (RHC-CCTV)-- The ashes of the historic leader of the Cuban Revolution have arrived in Santiago de Cuba.  Fidel Castro's final resting place is the island's second largest city and the center of many key moments in the revolutionary leader's life.

Santiago de Cuba is flanked by the Sierra Maestra mountains, the base for the July 26th movement's armed struggle against U.S.-backed dictator Fulgencio Batista.

When Batista finally fled the country on New Year’s Day 1959, a triumphant Fidel Castro came down from the mountains and gave his first victory speech from this balcony above what was then Santiago’s city hall.

From there, he took his rebel army on a victory caravan, slowly making its way through every town on the 900 kilometer journey to the capital, Havana.  Now Fidel Castro’s ashes are taking the exact reverse journey as his funeral caravan heads back to Santiago.

The Moncada army barracks is where on July 26th 1953 Castro launched an ill-fated attempt to seize the garrison.  The military action failed and almost everyone was killed or captured.  But it was the spark that lit the revolutionary movement to finally free the nation from the tyranny.

Fidel Castro will be laid to rest Sunday morning at Santa Ifigenia, the most historic cemetery in Cuba.  It houses the mausoleum of Jose Marti, Cuba’s National Hero most revered leader of the independence wars against Spain.

Fidel Castro led the Cuban Revolution as a continuation of Marti’s struggle for an independent Cuba -- a legacy they both share.