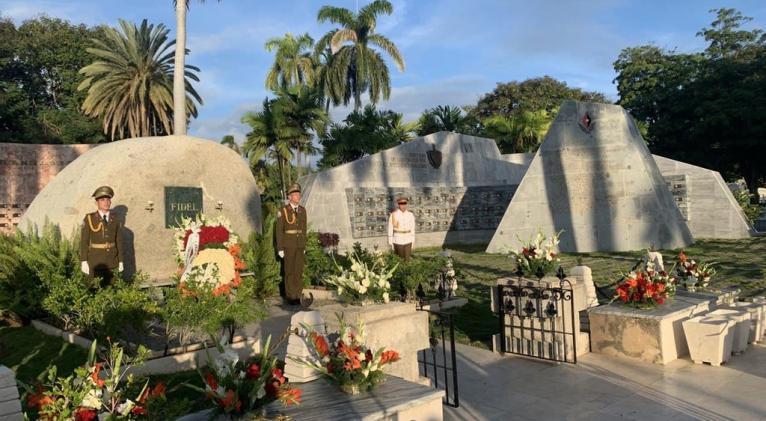 Santiago de Cuba, December 4 (RHC)-- More than 300,000 people from Santiago de Cuba, representing the entire country, paid tribute here Saturday to the historic leader of the Revolution Fidel Castro Ruz, on the fifth anniversary of the deposit of his ashes in the Santa Ifigenia Cemetery by Army General Raul Castro Ruz.

The tribute began with the changing of the Guard of Honor to the Founding Fathers of the Nation at the Sacred Altar of the Homeland by members of the Ceremony Unit that guards the cemetery in the eastern city.

Minutes later, Colonel Alberto Vazquez, Hero of Labor of the Republic of Cuba and Dr. Abel Tobias Suarez, doctor of the Henry Reeve Internationalist Contingent, laid a wreath on behalf of the Cuban people before the monolith that holds Fidel's ashes.

Then roses were colored by leaders of political, youth, mass and social organizations of the province of Santiago de Cuba and relatives of the Commander in Chief.

Fidel was heard in the voice of the concept "Revolution" that he gave on May 1st, 2000, in the Revolution Square "José Ti "tí" in Havana.

On this day of homage and continuity to the legacy of the Hero of the Moncada, the Granma Yacht and the Sierra Maestra, a patriotic march was held from the Plaza de la Revolución Mayor General Antonio Maceo Grajales to the Santa Ifigenia Cemetery, led by students and teachers.

The new generation gave a special touch to the pilgrimage by carrying photographs of different stages of the life of the world statesman, Cuban flags, flags of the 26th of July movement and revolutionary slogans, among them "I am Fidel".

José Ramón Monteagudo Ruiz, member of the Secretariat of the Central Committee and first secretary of the Communist Party of Cuba in this province stressed that the best tribute to Fidel is the daily fulfillment of duty for all he did for his beloved "Hero City" and praised the enthusiastic participation of the people of Santiago in this day of tribute and continuity by depositing roses before the monument where his ashes rest, the work of architect Eduardo Lozada León and the executors Antonio Matos and Yordenis Manual Gomez.

In the main hall of the Heredia Cultural Complex will be offered today the artistic evening that will make a journey through the work, values and thought of Fidel under the direction of Eliades Quezada and with the Eastern Symphony Orchestra, the Band of the Conservatory of Music Esteban Salas, the Madrigalista Choir, the soloists Grisel Gomez and Sulema Iglesias, the dance of the Professional School of Art José María Heredia, actors Dani Leyva and Dairon Chang, among others.