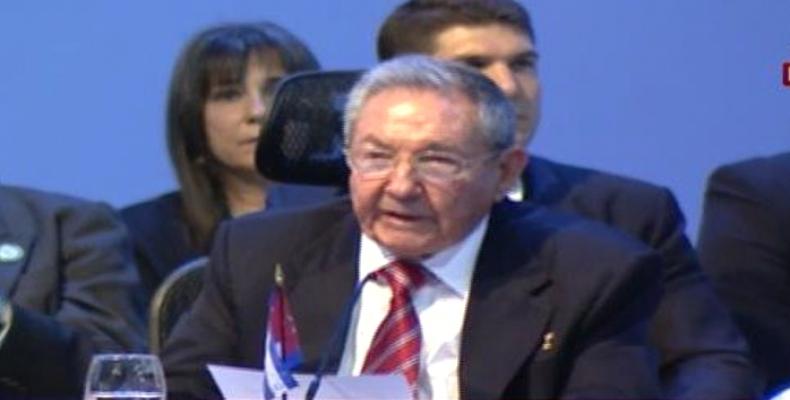 Punta Cana, January 26 (RHC)-- Cuban President Raúl Castro said Wednesday in the Dominican Republic that “unity and the political, economic, social and cultural integration of Latin America and the Caribbean constitute (...) a requirement for the region to successfully confront the challenges before us.”

In his speech at the 5th Summit of Latin American and Caribbean States (CELAC), in Punta Cana, the Cuban leader called to strengthen the regional bloc. In that sense, he noted that "strict adherence to the Proclamation of Latin America and the Caribbean as a Zone of Peace, signed by CELAC Heads of State and Government in Havana in January 2014, represents a framework to consolidate regional integration.”

The Cuban president stressed that unity is a priority, specially to successfully confront and overcome present and future challenges derived from the policy toward the region of the Administration of U.S. President Donald Trump and neoliberalism, which would increase poverty and unemployment, thus aggravating social conditions in Latin America and the Caribbean.

Regarding U.S.-Cuba relations, the Cuban president emphasized Cuba's willingness to continue negotiating pending bilateral issues with the U.S. government, on the basis of equality, reciprocity and respect for the sovereignty and independence of Cuba.

President Raúl said: “Cuba and the United States can cooperate and coexist in a civilized manner, respecting differences and promoting all that benefits both countries and peoples, but it should not be expected that to do so Cuba will make concessions inherent to its sovereignty and independence.”