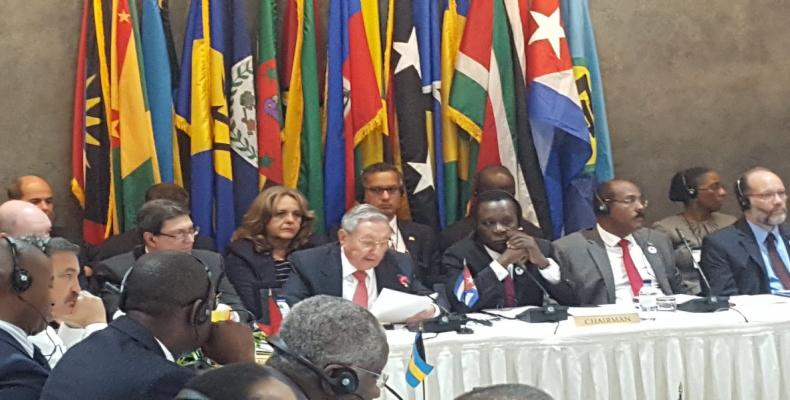 Saint Mary's, December 8 (RHC/Prensa Latina)-- President Raul Castro called Friday for unity in diversity, integration and genuine cooperation among Caribbean states to face common challenges and problems of the region and the world.

During a speech at the 6th Cuba-CARICOM Summit, Raul Castro also warned of the dangers looming over humanity. “How can we face the challenge of moving towards development in the midst of the deep economic, social, political and environmental crisis besieging this hemisphere and the world,” he asked.

The dangers for survival of the human species increase, noted Raul, adding that concepts not universally accepted, like 'humanitarian intervention' and 'responsibility to protect,' are being used to disguise interventions and aggressive actions that threaten international peace and security.

Situations like this, said the Cuban president, point to the need for the upholding of international law and principles enshrined in the Charter of the United Nations.'

Raúl Castro said Caribbean countries should come together in demanding fair action by industrial nations in order to mitigate and deal with the effects of climate change, particularly by providing financial resources and the transfer of technology.

“I reiterate Cuba's invariable position of supporting, in all circumstances, the right of small island states and developing nations to receive special and differential treatment in access to trade and investment,” said Raul.

He noted that Caribbean nations should agree on how to address the 2030 agenda for sustainable development and, especially, how to collectively face the mechanisms of domination imposed by an unjust international financial system.

In his address before leaders of the 14 member-nations of CARICOM, President Raul Castro renewed Cuba's determination to consolidate ties with its neighbors.

“We will continue to receive Caribbean students in our universities. There are 5,640 young people of the Caribbean who have completed training in Cuba, and 695 others currently study in Cuban universities, he stressed.

Raul Castro also said there are more than 1,700 Cuban experts working in cooperation programs in the CARICOM countries, over 1,400 of whom are health specialists.