Cuba: ALBA-TCP´s strategic and urgent task is to defend Venezuela 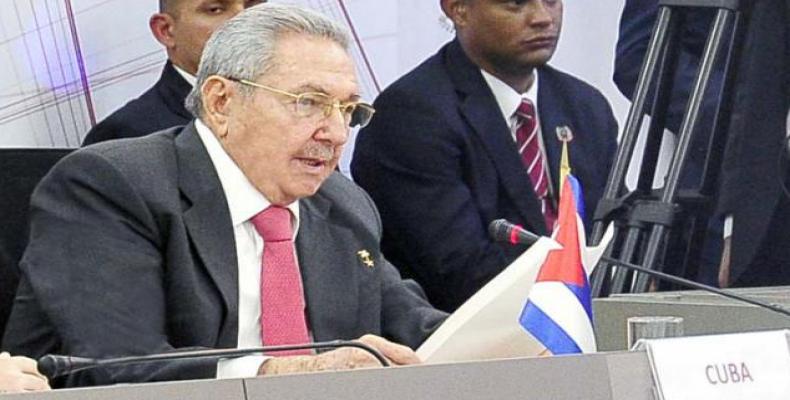 Caracas, March 5 (RHC)-- Cuban President Raul Castro has said that the joint defense of Venezuela is the strategic and urgent task of the ALBA regional bloc.

Speaking at the 15th Summit of the Bolivarian Alliance for the Peoples of the Americas –People´s Trade Treaty (ALBA-TCP) held in Caracas Monday, the Cuban leader added that the threats against peace and stability in Venezuela represent a threat to regional stability and peace.

"We proclaim our unwavering support for the Bolivarian Revolution and the civic-military union of its people, led by its president Nicolás Maduro," he stressed.

In his address, the Cuban president condemned the unilateral measures and the external interference against the Bolivarian and Chavista process that threatens the dialogue among Venezuelans.

He also criticized the exclusion of President Nicolás Maduro from the 8th Summit of the Americas, scheduled for next April in Lima, Peru.  “This illegal decision is unacceptable and interventionist, and it takes the hemisphere back to stages that seemed to be long gone."

He mentioned how the 19th century Monroe Doctrine, which claims Latin American and Caribbean countries colonial subordination to Washington, is being proclaimed as valid and relevant by the current resident of the White House.

The Cuban leader also rejected current attempts underway to dismantle regional integration mechanisms, as well as the unconventional war methods used by Washington since 1999 to subdue the Venezuelan revolution.

In concluding his remarks, Raul Castro alluded to his forthcoming departure as Cuban president, and insisted on the need for unity among the countries of the region.

“I speak on behalf of our Revolution and our people, as any other Cuban patriot will do tomorrow from this position, always knowing, as Fidel believed, that our peoples have no future without unity, without integration."

The Cuban leader ratified Cuba´s loyalty to the legacy of the leader of the Bolivarian Revolution, Hugo Chavez, who died on March 5, 2013.