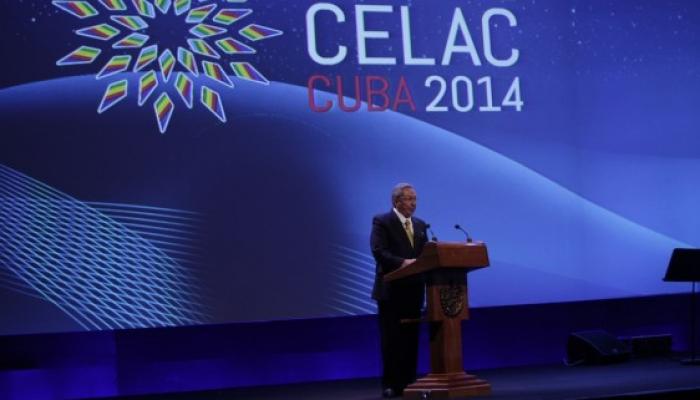 Havana, January 28 (RHC) -- Cuban President Raul Castro opened on Tuesday the 2nd Summit of the Community of Latin American and Caribbean States (CELAC), where heads of state and government of 33 regional countries are meeting to discuss new strategies to boost economic and social development.

In his 25-minute keynote speech as head of the host nation for the summit, Raul Castro said that the bloc is "the legitimate representative of the interests of Latin America and the Caribbean."

The Cuban president said: “In the context of CELAC, we have the possibility to create a model of our own making, adapted to our realities, based on the principles of mutual benefit and solidarity.”

The two-day summit's main theme is fighting poverty, inequality and hunger in a region where more than 28 percent of the inhabitants live in poverty and 11 percent in extreme poverty.

Raul Castro said: "While it is true that some progress has been made during the last few years, this has been slow, fragmented and unstable." The Cuban statesman noted that the bloc should prioritize the creation of a common political space to foster peace and respect between our nations, where we are able to overcome objective obstacles, and create a new paradigm of regional and international cooperation.

In a speech of great economic content, the Cuban head of state stressed that the peoples of Latin America and the Caribbean are demanding and need a better distribution of wealth and income, free and universal access to quality education and health care, full employment, better wages, food security and guarantees to decent housing, clean water and sanitation.

Tuesday's session of heads of CELAC states began with one-minute of silence to remember the late Venezuelan President Hugo Chavez, who succumbed to cancer last March.

Cristina Fernandez of Argentina, Evo Morales of Bolivia, Dilma Rousseff of Brazil, Nicolas Maduro of Venezuela and Mexican President Enrique Pena Nieto are among the government leaders participating in the meeting. United Nations Secretary General Ban Ki-moon and Jose Miguel Insulza, secretary-general of the Organization of American States (OAS), are attending the summit as observers.

The CELAC bloc of 33 Latin American and Caribbean nations was founded in December 2011 in Venezuela to promote regional integration without the influence of the United States.

The group plans to sign a more than 80-point statement on Wednesday on issues ranging from combating poverty to disarmament -- a document prepared by delegates from the attending countries during diplomatic debates since the weekend.