Statement issued by the Ministry of Foreign Affairs of Cuba 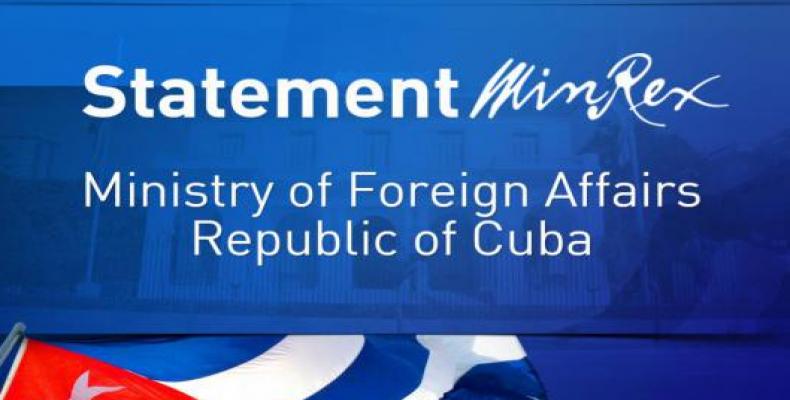 n 17 February this year, the United States Embassy in Havana and the Department of State informed the Ministry of Foreign Affairs of the occurrence of some alleged incidents affecting some officials of that diplomatic mission and their families.

Cuba took this issue with the utmost seriousness and acted expeditiously and professionally in order to clarify the facts of this situation, initiating a comprehensive, priority and urgent investigation on the indications of the highest level of the Cuban government. To this end, it conveyed to the United States Embassy the need for information-sharing and proposed to establish cooperation between the competent authorities of both countries.

The Cuban authorities set up an inter-institutional expert committee for the analysis of the facts; expanded and reinforced the protection and security measures of the mission, its staff and diplomatic residences; and new channels were made available for direct communication between the Embassy and the Department of Diplomatic Security.

In this context, on 23 May, the Department of Sate informed the Cuban Embassy in Washington of the decision that two Cuban diplomats leave the United States territory. This led to a protest by the Ministry of Foreign Affairs due to this unjustified and unsubstantiated decision.

The Ministry of Foreign Affairs reaffirms that Cuba complies rigorously and seriously with all its obligations arising from the 1961 Vienna Convention on Diplomatic Relations in connection with the protection and inviolability of diplomatic agents and the premises of diplomatic missions.

Our country’s impeccable track record in this area is recognized internationally and Cuba is universally considered as a safe destination for both visitors and foreign diplomats, including Americans.

The Ministry categorically emphasizes that Cuba has never, nor would it ever, allow that the Cuban territory be used for any action against accredited diplomatic agents or their families, without exception. Moreover, it reiterates its willingness to cooperate in the clarification of this situation.