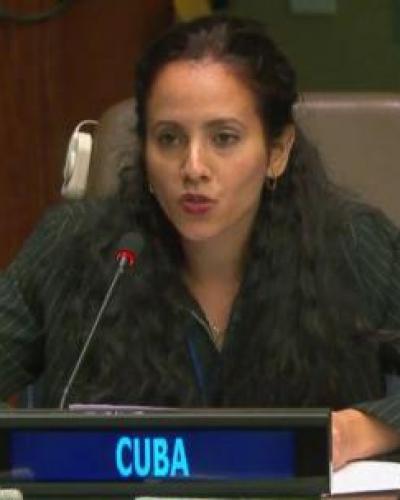 New York, October 24 (RHC-Minrex)-- Cuban representative at the United Nations Lilianne Sánchez Rodríguez has called on the  international community to take concrete and urgent measures to ensure that the resources currently earmarked for military purposes are reoriented towards activities generating economic and social development and a life of dignity for all human beings. This, she said, would contribute to the maintenance of international peace and security.

During the thematic debate on "Other measures of disarmament and international security" of the First United Nations Commission during the 72nd session of the General Assembly, the Cuban diplomat reiterated the validity of multi-lateralism as a basic principle of all negotiations on disarmament and non-proliferation, and stressed that the multilateral decision-making process, through the United Nations, in strict compliance with the Charter and the principles of international law, is the only effective way of safeguarding international peace and security.

She also referred to the hostile use of telecommunications, with the stated or disguised purpose of subverting the legal and political order of states, a violation of which the island is an example. She argued that Cuban radio space is attacked by illegal radio and television broadcasts that spread programming specially designed to incite the overthrow of the constitutional order freely established by the Cuban people. In that context, she called for an immediate end to these aggressive policies that are detrimental to Cuban sovereignty, which are also incompatible with peace, security, development and cooperation among States.

Sánchez Rodríguez also recalled that at the second summit of the Community of Latin American and Caribbean States (CELAC) in 2014, the region of Latin America and the Caribbean was proclaimed as a Zone of Peace. Among other objectives, to foster friendly and cooperative relations with each other and with other nations, regardless of the differences between their political, economic and social systems or their levels of development, to practice tolerance and coexist in peace as good neighbors.