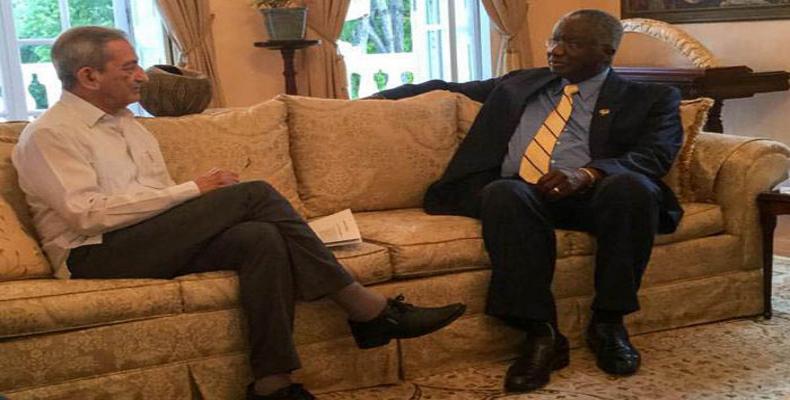 During the meeting, Primer Minister Stuart, a member of the Democratic Labour Party, voiced satisfaction with the visit of the high-ranking Cuban government official, saying it will contribute to strengthening bilateral political links. The Barbadian prime minister said he a strong admirer of Cuban Revolution leader, the late Fidel Castro, who visited Barbados on various occasions.

“Cuba can continue counting on the support and solidarity of the government and people of Barbados,” said Stuart, who on October 23rd last market seven years as the Barbadian prime minister.

The Cuban official thanked the Barbadian leader and recalled that Barbados was among the first four Caribbean states, along with Jamaica, Trinidad and Tobago and Guyana, to establish diplomatic relations with Cuba on December 8th, 1972, in defiance of Washington's aggressive, isolationist policy against Cuba.

Balaguer Cabrera recall the words of Fidel at the time, when he called the then prime ministers of Barbados, Errol Barrow; Michael Manley of Jamaica; Guyana's Forbes Burnham and Eric Williams of Trinidad and Tobago the founding fathers of Caribbean integration, who led the way in defining today's foreign policy of Caribbean Community, marked by principles of independence, courage and concerted action.

Ramón Balaguer Cabrera arrived in Barbados from a four-day official visit to Trinidad and Tobago, where he participated in the Congress of the Movement for Social Justice and health talks with political leaders.