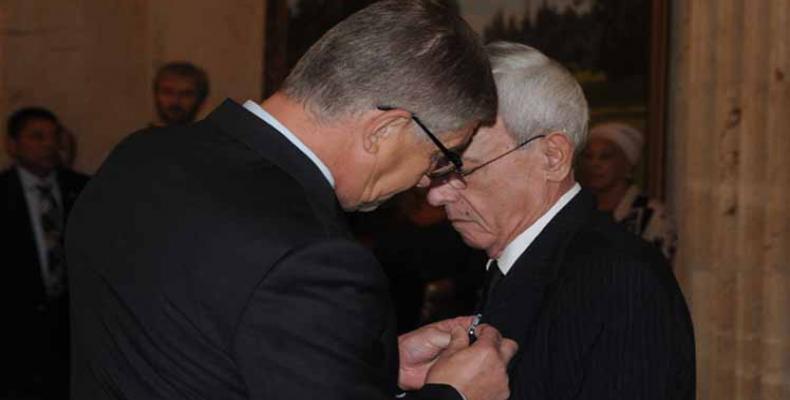 On hand were Cuban Army Generals Álvaro López Miera and Ramón Espinosa –both members of the Political Bureau of the Cuban Communist Party's Central Committee-- as well as authorities and representatives of the Cuban government, the country's Foreign Ministry and cultural institutions.

Ambassador Kamynin described Eusebio Leal as a true friend of Russia and the Russian people. He highlighted the high prestige of the Cuban intellectual, both in and outside of Cuba and his tireless efforts toward further strengthening friendship relations between the Caribbean state and the Eurasian country.

In extending his gratitude to Russian President Vladimir Putin, the Havana historian recalled what he called 'unforgettable' memories of his visits to a country that he said: 'has contributed  a huge historical and cultural legacy to all of humanity.'

Eusebio Leal recalled the signing by Revolution leader Fidel Castro of the official authorization to build the Orthodox Church of Our Lady of Kazan in Old Havana in the 1990s, as a symbol of the strong friendship ties between the Cuban and Russian governments and peoples.