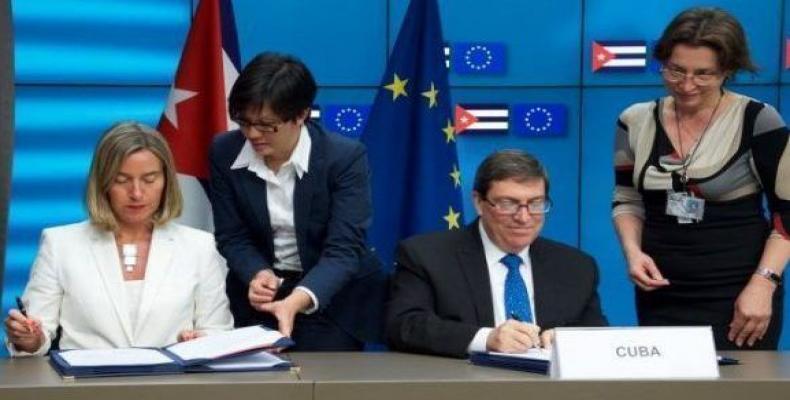 Brussels, May 16 (RHC)-- Cuba and the European Union (EU) signed a cooperation agreement to promote renewable energies in the Caribbean nation.

Cuba and the EU held on Tuesday their first Joint Council aimed at promoting bilateral ties, after the entry into force on November 1, 2017 of the Political Dialogue and Cooperation Agreement that was signed by both parties in 2016.

At the end of the meeting, which was chaired by the Cuban Minister of Foreign Affairs, Bruno Rodriguez, and the head of European diplomacy, Federica Mogherini, both parties signed the accord worth 18 million euros, intended to support the development of renewable energies, reports Prensa Latina.

In a press conference after the meeting, Mogherini explained that both parties are also working on an agreement to benefit the island´s food security and sustainable agriculture.

According to the head of European diplomacy, the  Political Dialogue and Cooperation Agreement will now offer new opportunities to enhance investment and trade, and will better support the economic and social updating process of Cuba, as well as contribute to its sustainable development.

During the press conference Rodriguez denounced that the US blockade against the island continues to represent the main obstacle to the full development of economic and commercial ties between the EU and Cuba.

In this regard, he recalled that the government of Donald Trump has increased the application of this hostile policy, especially in the financial sector, with a strong extraterritorial impact that affects European banks and companies.

The Cuban Foreign Minister thanked the traditional position of the EU against the blockade.

Regarding relations with the EU, Rodriguez stressed that conditions are favorable to continue expanding ties, adding that this level shows 'the ability to build spaces for dialogue and cooperation for mutual benefit and the purpose of privileging the elements that unite us above those that differentiate us '.