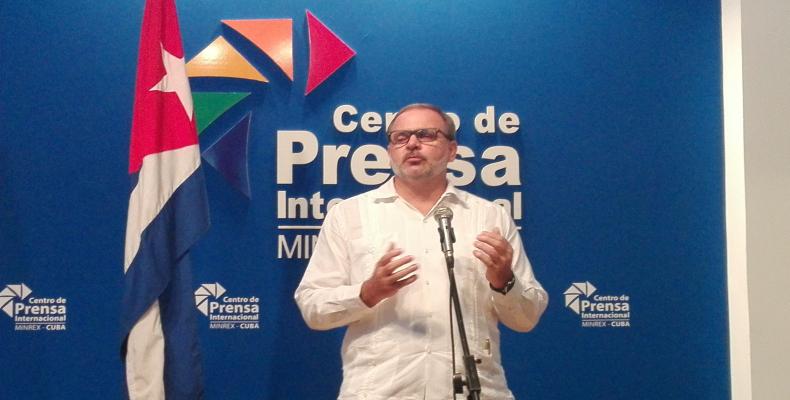 Havana, June 7 (RHC)-- Cuba has condemned in the strongest terms a resolution of the Organization of American States (OAS) directed against Venezuela, debated on June 5th at the organization's 48th General Assembly.

At a press conference Wednesday, the director general for Latin America and the Caribbean with the Cuban Foreign Affairs Ministry, Eugenio Martínez Enríquez, said the resolution amounts to unacceptable interference in the internal affairs of that South American nation.

The Cuban diplomat noted that the document, submitted by the United States, urged OAS members to adopt measures toward destabilizing the internal order in Venezuela, from the incitement of violence to the imposition of all sorts of coercive, unilateral sanctions.

He said: "The resolution does not contribute in any way to the much needed internal dialogue in Venezuela.”  He criticized the pressures on many OAS members, which he said “actually prevented an agreement between the constitutional government of President Nicolás Maduro and the country's opposition."

The Cuban diplomat then praised the dignity shown by a large group of OAS member states, which refused to yield to U.S. pressures and did not support the resolution, noting that the proposal failed to secure the 24 votes needed to pass.