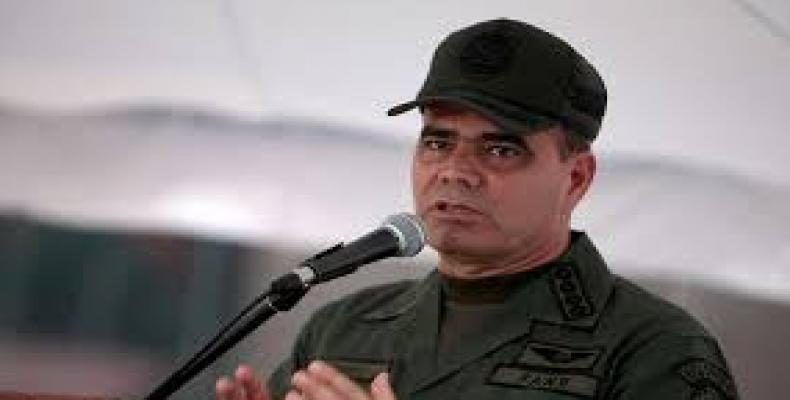 Caracas, July 20 (RHC)-- Venezuela's Minister of Defense Vladimir Padrino Lopez stated in a press conference Wednesday that the National Bolivarian Armed Forces of Venezuela strongly rejects the interference of Western powers in the internal affairs of the country.

"The FANB categorically rejects the alliance of governments operating against the nation and repudiates as firmly as possible the statements of (U.S. President Donald) Trump who, in an affront to Venezuela, has dared to threaten the Venezuelan people with imposing economic sanctions on the government if it goes ahead with its Constituent Assembly.  It is a shameless and vile statement that represents clear meddling in the internal affairs of the country."

The minister also denounced the opposition that calls its supporters into the streets, leading to violence that "sets people on fire, attacks medical and educational centers, and attempts to destroy cities."  Stating the firm anti-imperialist character of the armed forces, Padrino called on the military to close ranks against these interventionists attacks.  The military official also described how forces will be deployed starting Friday to distribute electoral equipment to the over 14,000 polling centers in the country ahead of the Constituent Assembly vote on July 30th.

Vice President Tareck El Aissami also denounced Trump's interventionist plans, stating that the civic-military alliance will be activated on July 21 to ensure the safe and free participation of the Venezuelan people during the vote.

The statement came after Venezuelan President Nicolas Maduro led a session of the National Defense Council Tuesday night at the Miraflores Presidential Palace aimed at developing strategies to defend Venezuela's sovereignty after Trump promised "swift and strong actions" if Venezuela decided to proceed with elections for the National Constituent Assembly.  Maduro criticized Trump's threats as "vulgar," arguing "the process of the constituent assembly is already in the hands of the people who will exercise their right to vote."

Maduro's call for the National Defense Council after the Venezuelan Foreign Ministry in a statement rejected the U.S. government's "unbelievable" comments on Venezuela that "shows its absolute bias towards the violent and extremist sectors of Venezuelan politics, which favor the use of terrorism to overthrow a popular and democratic government."

The ministry was referring to a statement issued Monday by President Donald Trump, which said: "If the Maduro regime imposes its Constituent Assembly on July 30, the United States will take strong and swift economic actions."  Trump's threats were repeated by the U.S. State Department which released a statement calling on "the Government of Venezuela to abandon the proposed National Constituent Assembly."

"The thin democratic veil of the Venezuelan opposition has fallen, and it reveals the brutal interventionist force of the U.S. government, which has been behind the violence suffered by the Venezuelan people over the past four months.  It is not the first time that we denounce and confront threats as ludicrous as those contained in this unbelievable document," the statement added.  The document called on the people of the world to defend sovereignty, self-determination and independence.

The threats come after record high numbers turned out to participate in the historic dry run vote for the ANC, which is aimed at easing tensions and creating a more representative constitution. Despite the mass show of public support, the event was largely ignored, as international leaders continued to criticize the Venezuelan government and demand immediate elections.

EU diplomat Federica Mogherini likewise urged President Nicolas Maduro to suspend plans to convene the ANC, noting that the move would be “an important gesture” toward de-escalating tensions.

Organization of American States Secretary General Luis Almagro chimed in Tuesday, saying that if the ANC went ahead it would be inappropriate, and he demanded that the assembly be canceled.

Joining the interventionist attacks, Colombia and Chile reportedly filed a lawsuit at the International Criminal Court in The Hague against Venezuelan President Maduro on charges of alleged torture and illegal imprisonment.

Maduro defended Venezuela's “dignity and sovereignty” against these threats Monday, telling Rajoy to "get your nose out of Venezuela" while reminding the “insolent” Mogherini that “Venezuela is a free, sovereign country ... not a colony of Europe.”

"For Mariano Rajoy, (the opposition plebiscite) is a legal referendum in relation to the state and to the Constitution, but the referendum of the people of Catalonia to decide their status before the Spanish state is not legal," he added.

In defense of the assembly, Maduro recounted the Battle of Ayacucho in Peru, a concluding military victory of the Latin American revolutionary wars, when the forces of Grand Marshal Antonio Jose de Sucre decisively forced the Spanish Empire to surrender and end its reign over South America.

“Ours is a Constituent Assembly for independence, sovereignty and national dignity,” Maduro claimed. “Let Europe say what it wants to say, we do not care what Europe says. We care about this land, our dignity, the land of the liberators of the Americas!”

The dry run vote was held Sunday in anticipation of the official July 30th vote for the National Constituent Assembly.

Given the surge of right-wing protest violence, Tibisay Lucena, president of the CNE, said Sunday that the voting exercise was particularly important to ensure that the voters can exercise their right to vote in safe conditions. She explained that part of the exercise was to identify those localities within the municipalities where the safety of voters could be threatened during the electoral event.

"We continue to evaluate measures that protect the lives and physical safety of voters because there have been expressions of fear about going to vote ... We assure people that we will continue to look for measures so that they can come out and vote peacefully on voting day," Lucena said.

While there were some reports of violence, the dry run vote was largely carried out in a festive mood.  Some 496 polling centers were authorized in all the municipalities of the country, 55 of which functioned as pilot centers, according to the National Electoral Council.  Nearly 1,942 voting machines were deployed in the dry run to help voters learn how to use the machines.

"It is clear that the majority of Venezuelans want peace, dialogue and a future," Jorge Rodriguez, head of the Zamora 200 Campaign Command, said at a press conference, noting the unprecedented nature of the turnout.  "Today a new machine has been born, one that will push forward a new history, a new dawn."