Despite difficulties in US-Cuba bilateral relations, Joint Declaration on Migration is working 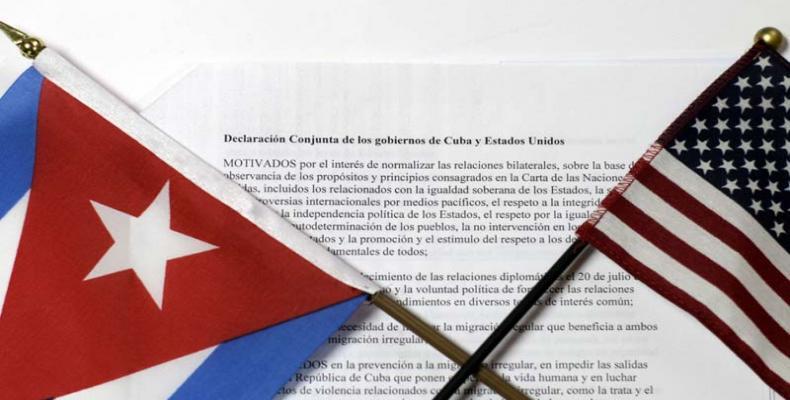 Havana, July 9 (RHC)—One year and a half after its implementation, the Joint Declaration of Cuba and the United States on migration is showing results and is helping reduce illegal and unsafe migration between the two countries.

Yuri Gala Lopez, director of Bilateral Affairs of the United States Desk at the Cuban Foreign Ministry, told the Cuban News Agency that Havana is complying strictly with all its commitment on the subject, even in difficult circumstances in bilateral relations.

Gala Lopez highlighted that the suppression by the United States of the dry-foot and wet-foot policy and its parole program for Cuban health professionals in third countries, covered by the Joint Declaration signed on January 12th, 2017, has led to a significant reduction of irregular migration.

According to the US Customs and Border Protection Service (CBP) in FY 2016, 41,523 Cuban citizens arrived at the border crossings of that country with Mexico; in 2017 that figure decreased to 15,410 and until last June 30 they barely exceeded 4,700.

Information published by local media in the United States quoting the US Coast Guard, emphasizes that the enforcement of the Joint Declaration has prevented  the arrival of rafters to the coasts of that nation. A South Florida news channel reported last April that only 144 Cubans had attempted to enter illegally by sea since October 1, 2017; compared to 1,951 detected in the previous fiscal calendar.

Gala López commented that Cuba has periodically received the so-called inadmissible - those that after January 12, 2017 tried to enter or remain illegally in the US - always in accordance with the provisions of international laws and regulations and following the mechanisms agreed upon between institutions of both governments.

However, the Foreign Ministry official noted that achieving normalization of bilateral migratory relations is a complex issue because for decades,  the United States implemented biased and selective measures as political tools to destabilize the island´s authorities.

Gala further stressed that the Cuban Adjustment Act remains as a fundamental obstacle to the full normalization of bilateral migratory relations, since it is an encouragement for those who intend to emigrate without adhering to the rules for a regular, safe and orderly transit.

Although in 2016 and 2017 the United States fulfilled its commitment to grant at least 20 thousand travel documents for Cubans who intend to migrate to that country in a regular and safe way,  Gala cautioned that its quite probable that this year that goal will not be fulfilled , because of the suspension of consular work in Washington´s Embassy in Havana.