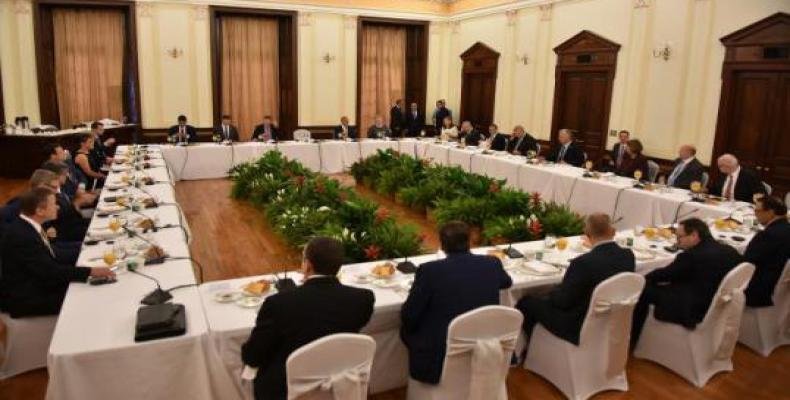 New York, September 28 (RHC)-- Cuban President Miguel Diaz-Canel met with representatives of the U.S. agricultural sector on Thursday and highlighted how this is one of the areas that most strongly advocates for normalizing relations between the two countries.

"Although our agenda in this visit to the UN General Assembly is very tight, but we had a lot of interest in this meeting and in bringing a message of peace, unity and understanding,” the Cuban president said.

The meeting held at the Cuban Mission to the United Nations was organized by the United States Agricultural Coalition for Cuba (USACC) and by the National Association of State Departments of Agriculture (NASDA).

Diaz-Canel recalled that agriculture is one of the sectors in which Cuba has had opportunities, though limited, to have economic and commercial dealings with the U.S., adding that there was a time when the island imported more than 1.1 billion dollars a year of U.S. products.  The president said that the figure was reduced due to the reinforcement of the U.S. blockade against the island.

“We fully support enhancing agricultural trade and cooperation with Cuba, and believe the current U.S. embargo should be lifted,” said Witte.  "Many state agricultural officials have existing relationships in Cuba, and we are here today to forge and enhance new partnerships between NASDA members and Cuban officials, particularly in agriculture.”

NASDA members underscored the need for exchanges on biotechnology research and knowledge, as well as cooperation on sanitary and phytosanitary issues.