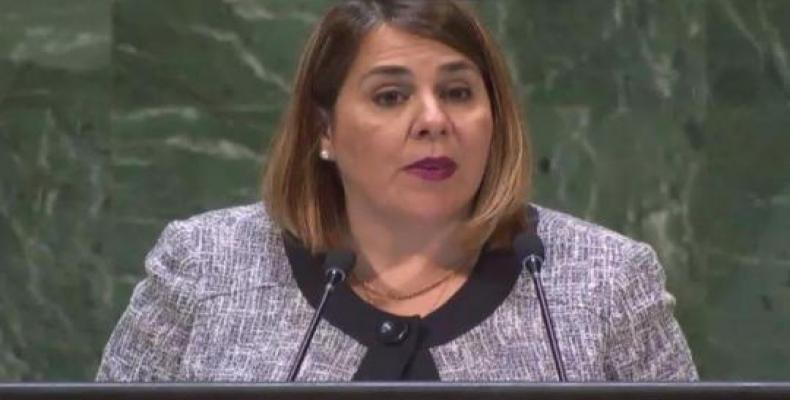 New York, October 30 (RHC)-- The Cuban deputy permanent representative to the United Nations, Ana Silvia Rodríguez, has expressed her country's commitment to the fight against impunity for crimes of aggression that target nations and peoples around the world.

In her statement on the United Nations agenda item 77, dedicated to the Report of the International Criminal Court, Rodríguez pointed to the need for an autonomous international jurisdictional institution to lead such a struggle.

The Cuban diplomat explained that a first step would be a new definition of crime of aggression, which must be established in a generic manner to include all types of aggression in international relations among States.

She added that the term 'crime of aggression' should not just be limited to military aggression and the use of force, but should instead include all actions that affect the sovereignty, independence and/or territorial integrity of States.

“Cuba, she said, “has suffered all sorts of aggression over nearly 60 years, which have caused thousands of deaths and serious, permanent injury to thousands of others, as well as unbearable human suffering and huge material, economic and financial losses.”

She insisted that the definition of 'crime of aggression', established at the Kampala Conference, does not include many of the types of aggression that the Cuban people have had to endure.

The diplomat reflected also on the broad powers granted to the UN Security Council, in virtue of Article 16 of the Rome Statute related to the work of the International Criminal Court (ICC).   She insisted that the broad powers of the security council run contrary to ICC's status as an independent institution, since it violates the principle of independence of jurisdictional bodies and the transparency and impartiality in the administration of justice.

The Cuban diplomat confirmed her country's position in favor of the establishment of an impartial, non-selective, effective, and fair international criminal jurisdiction, complementary to national justice systems, truly independent and, therefore, exempt from subordinations to political interests that could distort its essence.

She said that Court must abide by International Treaties and the principles of International Law, and observe the principle of law regarding the consent of the State to be bound by a treaty, set forth in Article 11 of the Vienna Convention on the Law of Treaties of May 23, 1969.