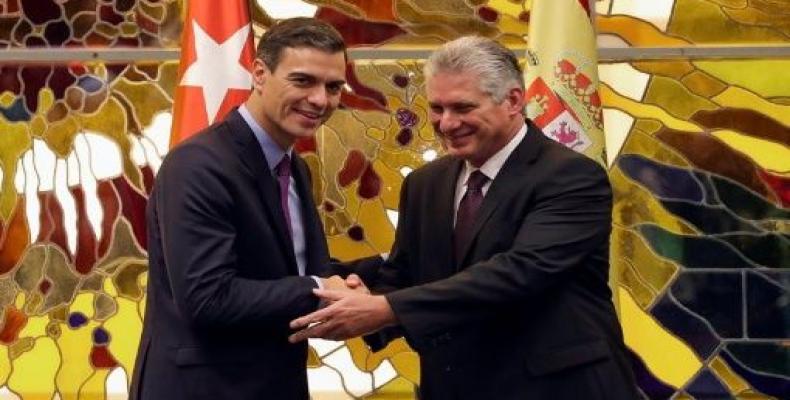 Havana, November 23 (RHC)—Spain´s Prime Minister, Pedro Sanchez, is ending a two-day official visit to Cuba. Upon his arrival Thursday, he laid a wreath at the Jose Marti Memorial and met with Cuban president Miguel Diaz-Canel.

On Friday Sanchez will tour the historic center of Old Havana, declared a World Heritage Site in 1982 by UNESCO, and he will also participate in a Cuba-Spain business forum at the Iberostar Grand Packard Hotel.

On Thursday Díaz-Canel and Sánchez expressed the interest of both nations in strengthening relations in the economic-commercial, cultural, scientific and academic fields.

They also led the signing of two memoranda between Cuba and Spain.

One of the documents establishes a regular framework for bilateral consultations, and it was signed by Spanish Foreign Minister Josep Borrell, and his Cuban counterpart, Bruno Rodríguez.The memorandum is expected to contribute to the expansion and deepening of bilateral relations as well as the establishment of a mechanism to address matters of common interest and issues of the regional and multilateral agenda.

The other document covers ​cultural cooperation and was signed by Borell and the Cuban Minister of Culture, Alpidio Alonso.

This is the first official visit by a Spanish prime minister in 32 years. Sánchez arrived in Havana on Thursday at 4:52pm local time, accompanied by his wife Begoña Gómez, Foreign Minister Josep Borrell and Minister of Industry Reyes Maroto.

According to Spanish media, Sánchez expressed the “pleasure it would give the government for the King to come to Cuba in 2019” for the 500th anniversary of the foundation of Havana by Spanish explorer Diego Velázquez.