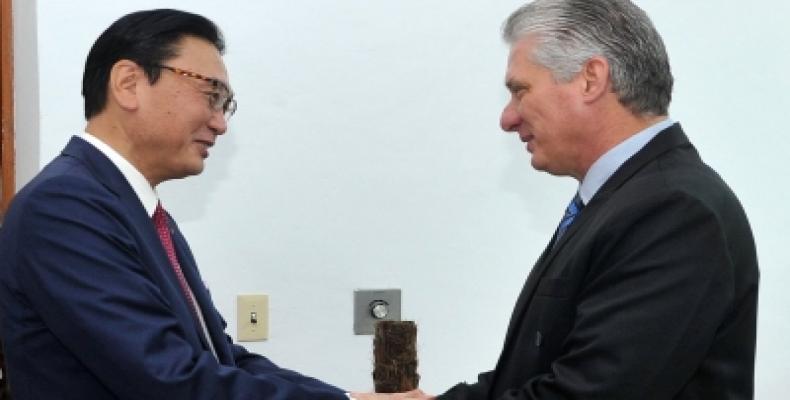 During the exchange, the two dignitaries reviewed the state bilateral relations, which they termed as excellent, and voiced both governments' intent on further strengthening economic and financial ties.

The Japan-Cuba Friendship Parliamentary League groups legislators of the main parties of the Asian country, among them the ruling Democratic Liberal Party, the Democratic Party of Japan, the New Komeito Party and the Party for Everyone.

Shortly after his meeting with the Cuban head of state, Furuya, who is also the Minister for Disaster Management and National Recovery, and the president of the National Commission on Public Security in the cabinet of Prime Minister Shinzo Abe, held talks with Cuban Vice President and Minister of Economy and Planning Ricardo Cabrisas, in the framework of the 3rd Meeting of the Japan-Cuba Joint Public-Private Committee.

The Japanese minister previously visited Cuba in January of 2014, when he was received by then president Raul Castro and the historic leader of the Revolution, Fidel Castro.  About his meeting with Fidel, Keiji Furuya said he was impressed by Fidel's modesty and selflessness.

This year, 2018, marks the 404th anniversary of the arrival to Cuba of the first Japanese citizen, Samurai Hasekura Tsunenaga.