Cuban Parliament President Receives the President of the Senate of Jamaica 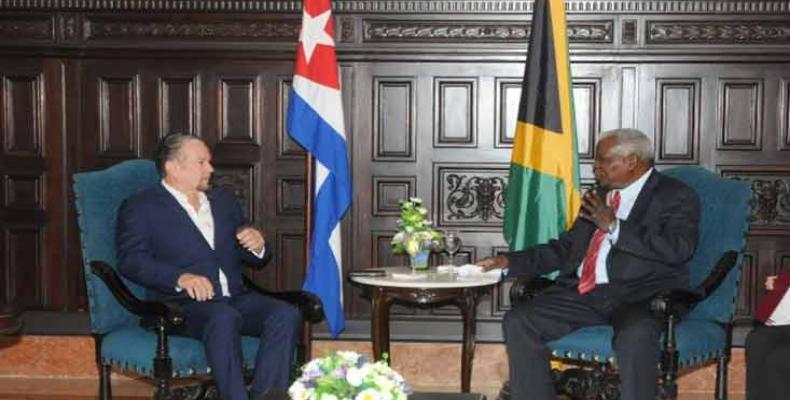 Lazo thanked the Government of Jamaica for its support in the fight against the U.S. blockade of Cuba, which affects not only the Cuban Government and people, but also many sectors of the United States.

He spoke of the importance of the search for unity in the Caribbean nations, despite the diversity, as well as the potential of the Community of Latin American and Caribbean States (CELAC) to achieve economic and social integration of the region.

He stressed the need to further strengthen the presence of the governments of the region in the different international organizations.

He recalled the historical ties between Cuba and Jamaica and  highlighted that this nation welcomed the mother of Antonio Maceo, Mariana Grajales; served as refuge to Máximo Gómez and witnessed the visit of José Martí in 1892 and 1894.

The President of the Jamaican Senate thanked the Cuban Government for the invitation and affirmed that his presence in Cuba responds to an invitation from President Raúl Castro at the Caricom-Cuba summit held in Antigua and Barbuda last December.

He praised the solidarity aid offered by Cuba, despite suffering the ravages of Hurricane Irma, to many affected Caribbean nations during the year 2017, "a fatal year", due to several hurricanes.

Tavares-Finson praised the importance of collaboration between the parliaments of Cuba and Jamaica and addressed the intention of the Prime Minister of his country that the Spanish become one of the official languages of this Caribbean nation, which would further strengthen the links between both nations.