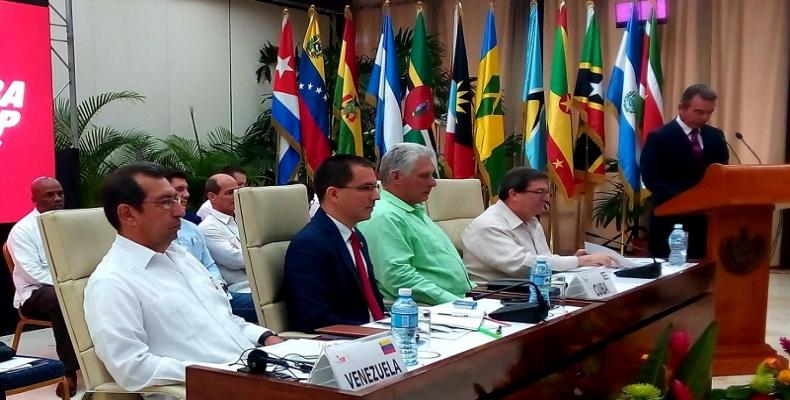 Havana, May 22 (RHC)— The 18th Political Council of the Bolivarian Alliance for the Peoples of Our America- Peoples Trade Agreement (ALBA-TCP) issued a  Final Declaration expressing  their concern about the aggressive escalation against the region, the actions against regional peace and security and especially the threats of the use of force against the Bolivarian Republic of Venezuela.

The Ministers of Foreign Affairs and Heads of delegations of the member countries meeting in Havana approved the document at the one-day meeting.

The declaration states that the threats, especially those against Venezuela, violate the principles of the Proclamation of Latin America and the Caribbean as a Zone of Peace. It also recognizes the resistance of the government and the people of Venezuela in face of foreign interference and unilateral coercive measures.

Likewise, the document reiterates its support to Constitutional president Nicolas Maduro, and the Bolivarian Revolution, supports the “Montevideo Mechanism” initiative and rejects the illegal occupation of Venezuelan diplomatic buildings in contravention of the Vienna Convention.

Cuban president Miguel Diaz Canel attended the closing session of the Political Council, where it was reiterated that the Bolivarian Alliance for the Peoples of Our America- Peoples Trade Agreement is and will bFinal Declaration, e a stronghold of resistance against the imperialist and neoliberal wave underway in the Latin American region.