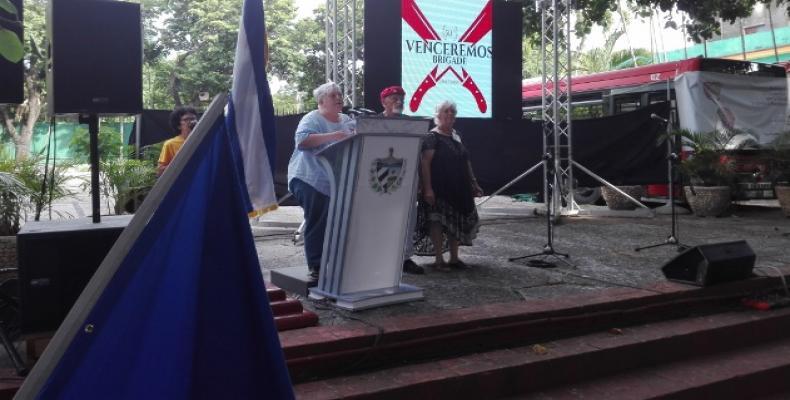 Havana, July 31 (RHC)-- The 164 members of the U.S. Venceremos Brigade, in Cuba to celebrate their 50th anniversary, have demanded the elimination of the commercial, economic and financial blockade against Cuba.

The contingent also called for the return to the Caribbean nation of the territory illegally occupied in the eastern province of Guantánamo by the U.S. naval base, the lifting of the travel ban and the dismantling of all sanctions on Cuba.

The 50 years of continuous solidarity to the island were commemorated at the Cuban Institute of Friendship with the Peoples, (ICAP) on Tuesday.

Leslie Cagan, who came to Cuba as part of the first contingent in July 1969, spoke on behalf of the brigadistas and voiced her satisfaction to be back and recalled her first trip to the island.

Fernándo Gonzalez, Hero of the Republic of Cuba and ICAP president, thanked the presence of the American brigade and the celebration of 50 years of continuous solidarity.

On hand at the commemoration were Antonio Guerrero, Hero of the Republic of Cuba,  Cuban intellectual Ricardo Alarcon, and officials from the Ministry of Foreign Affairs.

The brigadistas on the 50th Contingent of the Venceremos Brigade will remain in Cuba until August 13th,  holding numerous activities of friendship and solidarity in several provinces of the country.