Diaz-Canel: Cuba is not and will not be paralyzed 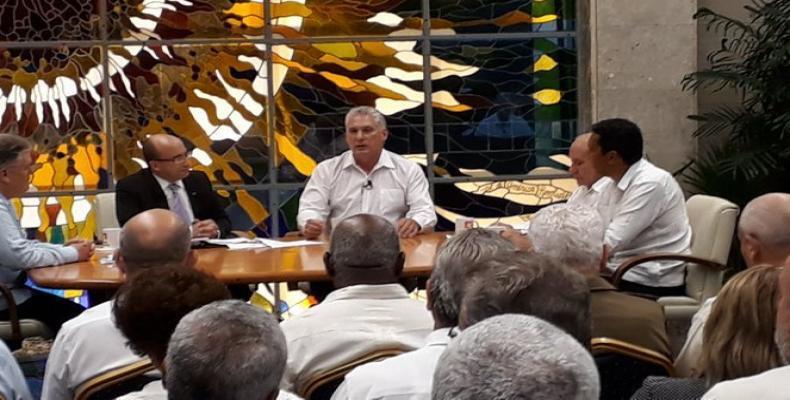 Havana, September 12 (RHC)-- For the second consecutive day, Cuban President Miguel Díaz-Canel made a special TV appearance on the Round Table program to continue informing the people about the measures adopted by the country to mitigate the difficulties resulting from the lack of availability of some fuels.

The situation is the direct result of the escalation by the Trump Administration, which now threatens and blackmails companies and freighters that bring oil to Cuba.  In his opening remarks the president thanked the people for their understanding after announcing a group of measures to address the energy situation.

He reiterated that Cuba has a strategy to face the contingency and reaffirmed that this is a situation related to the U.S. blockade imposed on the island for almost 60 years.

During the program, Economy minister, Alejandro Gil Fernández, said that an evaluation was made of the spheres of health, education, productive lines, basic services, constructions, to reduce some levels of activity, but he reiterated that the country will continue to function.

“We are not going to stop teaching, although there may be time shifts. Tourism will not be affected. Cuba is able to offer a quality service to the visitors who arrive on the island,“ he said.

In this sense, he acknowledged that the country is not going to function one hundred percent, but neither is it going to be paralyzed. "We are going to reduce the production of steel; for 20 or 15 days we have to endure those levels of production, which will then will have to be recovered.”

Raul Garcia Barreiro, Minister of Energy and Mines, for his part said that there is no established blackout program in the country and if necessary to adopt this strategy,  the population will be informed in a timely manner.

Also on hand for the programs was the Public Health Ministry Jose Angel Portal Miranda  who explained that amidst the current temporary situation, the sector counts with a support to guarantee its main activities, with fuels allotted to hospital boilers, ambulances, as well as the vital supplies.

The minister recalled that 65% of the reservoirs of Aedes Aegyptis mosquitos, the carrier of the dengue fever, is in private houses and that people’s active involvement is required in the fight against this insect.

In this regard, Portal said an intensive campaign for the eradication of the mosquito will be carried out during September, the month where the most important increase in vector reproduction begins.

President Miguel Díaz-Canel informed that together with members of a government team he will start on Friday a tour of the Cuban provinces to oversee the organizational implementation of the measures. The tour,  which will start in Havana and Mayabeque provinces, will also serve to explain the characteristics of the provisions and to know the contributions that can be made by local authorities and area residents.