Bad news for our imperialist enemies: The Cuban Revolution remains as victorious as ever 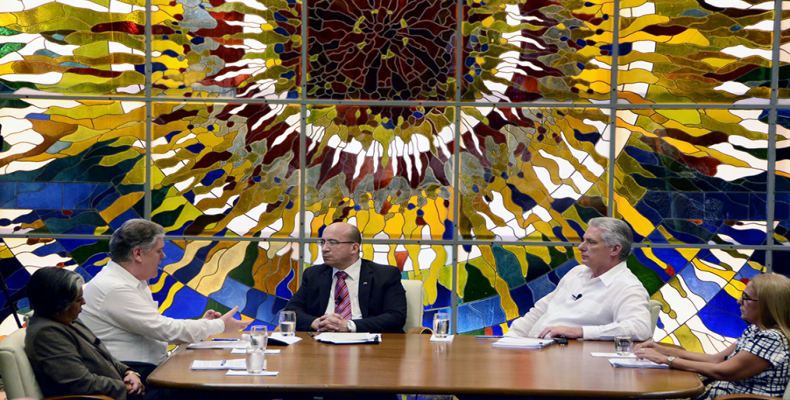 Havana, July 3 (RHC)—Cuban president Miguel Diaz-Canel Bermudez and the ministers of Economy and Planning, of Finance and Prices, and of Labor and Social Security, explained details on national TV of a series of measures recently announced to boost the island´s economy, amid increased US hostility.

In the first of two Roundtable programs aired Tuesday, the Cuban leader stressed that the economic package is aimed at not only resisting the reinforcement of the economic blockade, but also to take solid steps towards development.

Beyond the salary increase in the budgeted sector of the economy, the measures seek to encourage national production, diversify and increase exports, and replace imports.

Economy minister Alejandro Gil Fernandez spoke about the need to look for alternatives to solve economic problems within the domestic industry itself, with the island´s own economic actors and seeking to strengthen internal reserves, doing away with the prevailing importing mentality.

He added that authorities are studying the application of cryptocurrency, a system to allow private sector companies to export their products, measures to deter capital flight, and the creation of attractive products for the capturing of money remittances received on the island.

Labor and Social Security minister, Margarita Gonzalez, noted that all employees within the budgeted sector will get a pay increase, and she stressed that the measure is an acknowledgement to those who stayed and did not migrate to better paying businesses.

It is expected that 1.5 million workers, including doctors, nurses, teachers, scientists, and service personnel, among others, will be benefited by the measure.

For her part, minister of Finance and Prices, Meisi Bolaños, explained that to ward off inflation, a mechanism will be established to monitor wholesale and retail prices., so that there are no price hikes in the state or private sector, undermining the salary increase.

At the end of the program, president Diaz-Canel made an appeal to all Cubans to work with passion to create a better country.

He added that the enemy wanted to punish the island´s people with a tough summer, filled with uncertainties and bad news.

“But it is us who have bad news for them:  the Cuban Revolution is as victorious as ever, making progress even amidst difficult circumstances. And we have by our side the unbeatable Cuban people, with its historic leadership and its new generations, deeply committed with the island´s extraordinary history and with its hopeful future,” concluded the Cuban president.