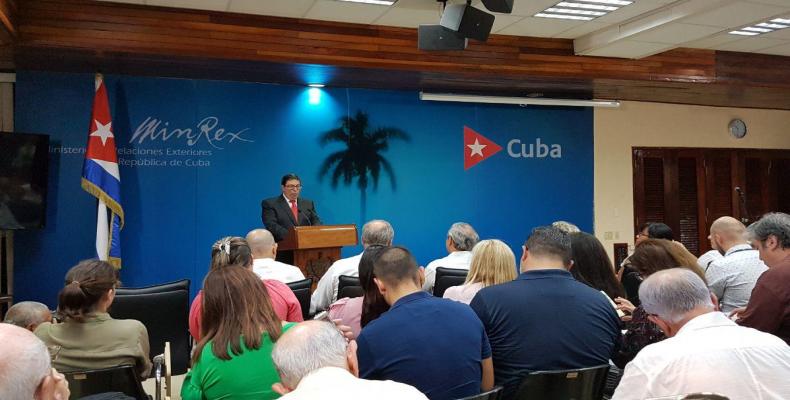 Havana, September 20 (RHC)-- The US blockade on Cuba was drastically reinforced from April 2018 to March this year, according to the annual report on the effects on the US decades-old measure against Cuba.

The report covers incidents ranging from April 2018 to March this year.  The estimated losses it cost to the Cuban economy during that period was of 4.3 billion dollars.

In presenting the text at a press conference in the Cuban capital, Cuban Foreign Minister Bruno Rodriguez said that the Trump administration is resorting to unconventional measures that amount to a qualitative change, greater aggressiveness and extraterritoriality to obstruct fuel delivery to the island from markets located in South America, Europe and North Africa.

Rodriguez added that the pressures include direct threats, the persecution of oil tanker companies, and pressures against government whose flags are used by the tankers.

During the period, he said, the implementation of Title III of the Helms Burton Act has taken place, opening the possibilities of US citizens to sue Cuban businesses or individuals or from third countries, who currently occupy or whose business are related to properties nationalized after the triumph of the Cuban Revolution on January 1, 1959.

Other measures have included the sudden suspension of authorized travels by US citizens to the island and the cancellation of port calls by Cruisers.

The minister noted that at current prices, the accumulated damages resulting from almost six decades of the blockade have reached 138,843.4 million dollars, and that taking into account the depreciation of the dollar against the value of gold on the international market, that amount reaches 922,630 million dollars.

The report provides a detailed account of US actions targeting the Cuban economy, measures under the Helms Burton Act, impact on the health and food sectors, and foreign trade, among others.

“Only an organized country, with a united population can weather without succumbing such a huge aggression. While it is easy to provide an economic assessment of the blockade, it is impossible to quantify its humanitarian impact on the Cuban people,” he said.

The foreign minister reiterated that the blockade continues being the main cause of the difficulties experienced by the Cuban people, of the shortages that the Cuban people suffer and the main obstacle to the island´s development.

“Those who blame the problems of the Cuban economy, particularly those that we are witnessing today, on the incompetence of the government, or the inefficiency of socialisms, show naiveté, ignorance, or complicity with the government of the United States in its genocidal, obsolete, illegal and cruel measure against Cuba,” he added.

The minister recalled that Cuba counts on the overwhelming support of the International Community that last year almost unanimously called for the lifting of the blockade with 189 votes, and he announced that the Cuban-sponsored Resolution on the necessity of the lifting of the US Blockade will be taken to the UN General Assembly floor next November 6th and 7th.