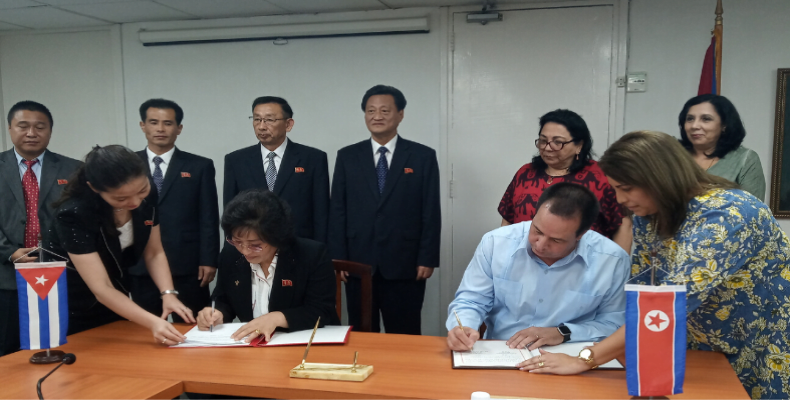 Havana, November 28 (RHC)--  The Minister of Public Health of the Democratic People's Republic of Korea, Oh Chun Bok, and her Cuban counterpart, Jose Angel Portal Miranda, signed a Memorandum of Understanding to strengthen the exchange and cooperation between the two ministries.

The Cuban minister recognized "the need to continue strengthening bilateral relations in health, especially in issues related to scientific development in health sciences, and the education and training of human resources."

Regarding the visit of the Korean health delegation to Cuba, Portal Miranda said this is the first time that a Minister of Public Health of that country has visited the Caribbean nation, representing an exchange without precedence in bilateral history.

For her part, the Korean minister highlighted the importance of Cuban President Miguel Diaz-Canel's tour around the Korean country last year and said that as a result of that visit, the Korean government advised her to "take experiences from the Cuban National Health System, because it is a priority for us to develop Socialist Public Health."

Chun Bok was accompanied by the deputy director of the Foreign Affairs Directorate of the Ministry of Public Health, the director and the head of the Science Department of the Institute of Biological Research attached to the Academy of Medicine of that country.

Cuba and the Democratic People's Republic of Korea established diplomatic relations on August 29, 1960, and since then they have kept fraternal ties, based on mutual respect and admiration, founded on the friendship of Commander in Chief Fidel Castro Ruz and the great leader Kim Il Sun.