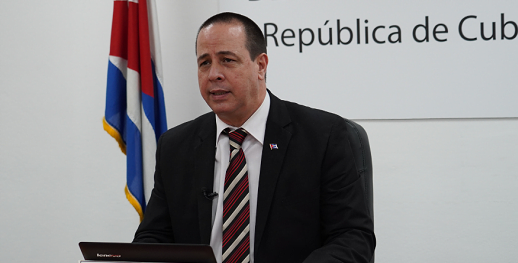 Address by the Minister of Public Health of Cuba, Dr. José Ángel Portal Miranda, at the 58th Directing Council of the Pan American Health Organization. September 28, 2020.

I request that in future meetings inclusive virtual platforms be used. ZOOM is not accessible from Cuba under equal conditions, due to the restrictions of the US blockade.

Dear Director, the report presented summarizes the results achieved in these complex months.

Cuba recognizes the work of the Director and of the Organization in this period and joins the main challenge that summons us today: the COVID-19 pandemic, which unfortunately is one of the regions of the Americas that has been most affected. I join in the condolences to the families and friends of those who have died in this cause.

Since this disease posed a risk to our people, its confrontation and control have been a priority for the Cuban Government. The intersectoral action, the immediacy in the decision making, the organization of the services and the individualized attention with a comprehensive approach, have allowed to obtain favorable results and to avoid the collapse of the services.

Our strength is to have a unique, inclusive, free and accessible National Health System, which prioritizes Primary Care and has 9.0 doctors per thousand inhabitants.

The work of health personnel and of scientists and researchers has been fundamental. Our care protocols and the use of the medicines developed by our biotechnology and pharmaceutical industry have allowed the recovery of 87% of the infected people and that the lethality rate is below the regional and world average.

Cuba is working on a vaccine candidate against COVID-19, which is in the phase of clinical trial.

These results have been possible despite the economic, commercial and financial blockade by the United States Government, which has been intensified in times of pandemic.

But nothing has prevented Cuba from guaranteeing quality health care to our people, without renouncing the principle of solidarity that distinguishes us.

At the request of several governments, 52 brigades of the "Henry Reeve" Contingent have collaborated in the fight against the pandemic in 39 countries, 22 of them in the region of the Americas. These brigades have joined the 28 thousand professionals who were already working in 58 nations.

Nothing can prevent Cuba from continuing its work of solidarity; neither the unjust blockade nor the constant attempts by the United States government to discredit and hinder Cuban medical cooperation, which it is attacking through a smear campaign that will not be able to undermine the noble work of our health personnel.

The United States' maneuvers against Cuba have been extended to PAHO, by deciding, without any legal mandate from the governing bodies, to carry out an external review of the More Doctors for Brazil program, of which Cuba was not previously informed, despite being one of the main actors in this cooperation.

This evaluation is the result of financial blackmail by the United States Government to the Organization and is carried out on the basis of terms of reference that prejudge the results beforehand.

My country denounces and rejects these actions, which clearly have political ends, and in which they have used the Organization, trying to hinder its relations with some of its member states.

Rest assured, the force of truth will always shatter lies.

We reiterate our support for the role of this Organization and our unconditional commitment to continue ensuring health services for all our people.

From this common and integrating space, we ratify our total certainty that international cooperation and solidarity are essential to save humanity from this grave crisis.