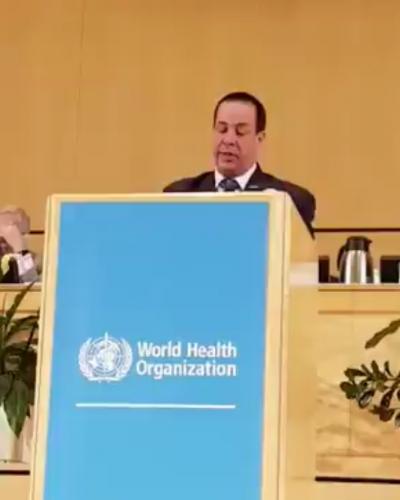 Geneva, May 21 (RHC)—Cuba´s Minister of Public Health, José Angel Portal Miranda, is heading the island´s delegation to the 72nd World Health Assembly, taking place until May 28 at the World Health Organization’s headquarters.

Addressing delegates to the conference on Monday, the minister highlighted Cuba´s humanitarian and solidarity vocation in the quest of universal healthcare, and noted that over the last 5 decades, the island has sent 407 000 health professionals to work in 164 countries from all continents, and has trained in its universities over 35 medical doctors from 136 countries.

The minister also recognized WHO´s efforts and leadership in the quest of Universal Healthcare Coverage and the importance of fostering international cooperation, sharing experiences, knowledge and good practices of the places where it has worked with success.

According to the Ministry of Foreign Affairs of Cuba, Portal Miranda will participate in the plenary sessions of the Assembly, and in the traditional meeting of health ministers of the Non-Aligned Movement.

Portal Miranda reported via Twitter that he held talks with his counterparts Mohamed Miraoui, from Algeria, and Faretin Koca, from Turkey, about cooperation on the development of the medical and biopharmaceutical sectors, and that they explored cooperation on other fields.