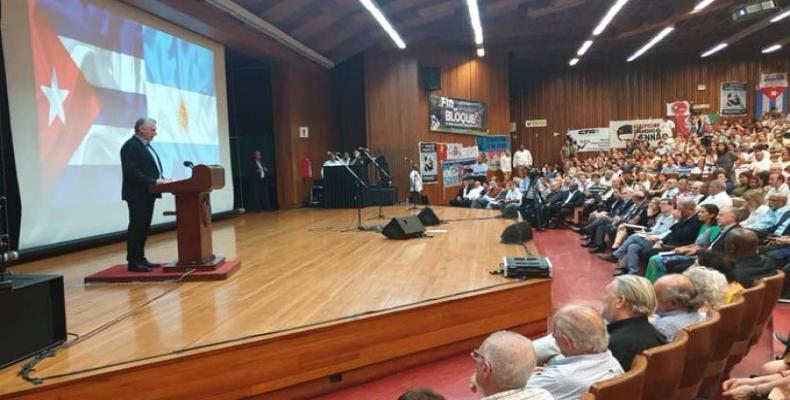 Buenos Aires, December 9 (RHC)-- With the presence of Cuban President Miguel Díaz-Canel, a ceremony of Solidarity with Cuba began in the Aula Magna of the University of Buenos Aires' Faculty of Exact Sciences.

The Argentinean Cuba Solidarity Movement and the Cuban Embassy organized the encounter for friendship between the two peoples.

Evoking the memory of the historic leader of the Cuban Revolution, Fidel Castro, and his Latin American dimension, the event began with the presentation of Eugenia Méndez, an Argentinean woman who graduated from the first class of the Havana-based Latin American School of Medicine (ELAM).

In his address at the university on Monday evening, Diaz-Canel highlighted the times of change and transformations that Our America is experiencing, and rejected imperialist domination, neoliberalism and the injustices they generate among our peoples.

Earlier on the day, the Cuban president paid tribute to the victims of state terrorism at the Parque de la Memoria –The Remembrance Park, in the northern end of the Belgrano section of Buenos Aires. The park is a memorial to the victims of the 1976–83 military regime, and is located close to a military airport that was used for the "flights of death" during which victims of the Military Junta government were thrown into the river and sea.

At the end of the tour through the Park, the Cuban delegation tossed flowers into the river to remember the victims of State Terrorism.

Likewise, Diaz-Canel placed a floral offering to the Monument to General San Martin, who with Simón Bolívar is considered one of the most outstanding personalities of the war of American emancipation. "The liberator of the South, the father of the Argentine Republic", as Martí called him.

He also met with a representation of Argentinian business community.

On Tuesday, the Cuban president and his delegation will participate in the swearing-in ceremony of Alberto and Cristina Fernandez. 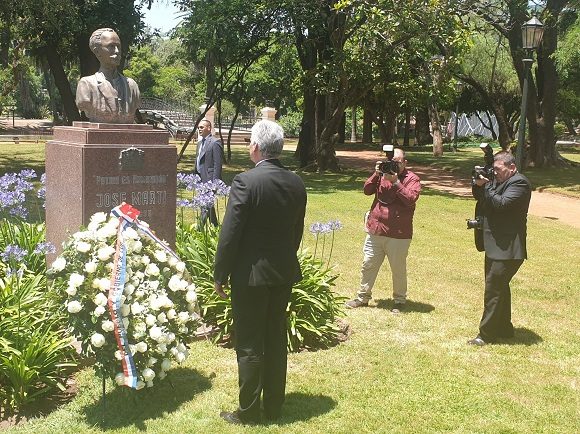