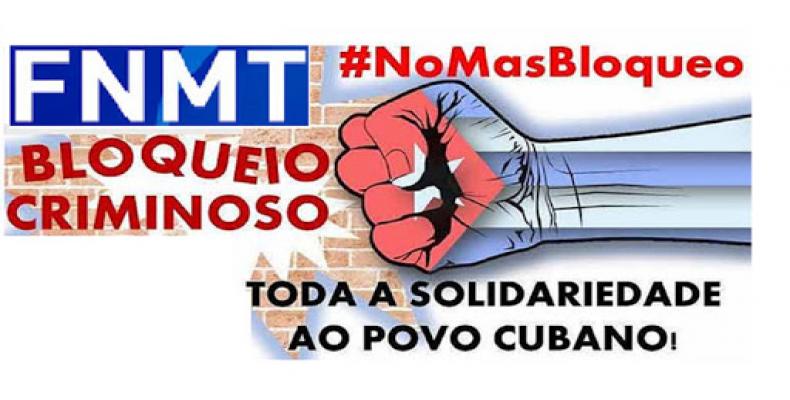 Brasilia, April 26 (RHC)-- The National Front for the Mobilization of Workers (FNMT) of Brazil has strongly denounced the U.S. blockade against Cuba, the main obstacle to acquiring medicines, equipment and materials needed in the current fight against COVID-19.

In a letter of solidarity, the FNMT reiterates that it rejects the unjust and intensified blockade at a "difficult time for the peoples of the world, marked by the serious crisis of the capitalist order, aggravated by the world pandemic of COVID-19, which has already affected more than 2.83 million people and decimated the lives of another 198,000."

The letter warns about "the increase of State terrorism by Donald Trump's government against Cuba" and points to "true genocide as American imperialism cuts off access that the revolutionary island had to two of its usual suppliers of breathing apparatus, with the clear and macabre intention of causing a massacre."

The Brazilian trade unionists also said that the siege against the island prevents the Caribbean country from buying the necessary medicines for the life of its people from U.S. companies. They point out that the hostile U.S. policy can cause considerable damage to Cuban citizens and the economy, despite all the efforts and the capacity of the authorities in Havana to mitigate its effects.