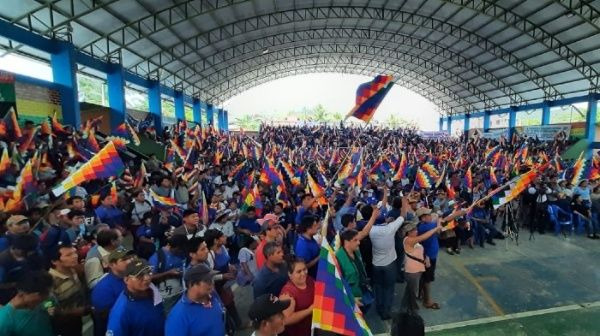 The federations of the Cochabamba tropics, Bolivia, constitute one of the strongest bases of the Movement Towards Socialism, the ruling party. | Photo: Twitter @evoespueblo

La Paz, September 21 (RHC)-- A conclave of the six union federations of the Tropic of Cochabamba department, Bolivia, demanded over the weekend, a criminal trial against the former de facto leader, Jeanine Añez.

The decision was announced by the former president of Bolivia and leader of the Movement Towards Socialism, Evo Morale, who gave details about the realization of the union forum and the proposal advanced by the Education, Health and Transportation Commission.

The commission approved a resolution accusing the former de facto ruler and her accomplices of violating the right to education, with the interruption of the school year in 2020.

According to the unionists, with the forced closure of the school year, the de facto government violated the constitutional rights to education of thousands of children, especially from Indigenous populations and from the Tropic of Cochabamba.

Evo Morales said that "not content with robbing the State and massacring the people, they tried to condemn us to ignorance in order to subjugate us.  That is the policy of the right wing."

At the same time, the congress of the six federations of the Tropic of Cochabamba, called for the unity of the popular movement, as they consider that it will continue to mark the path of the great structural transformations of the country.

Former president Evo Morales also made a statement in this sense and said that the national popular and peasant movement, and especially the coca growers' movement, besides guaranteeing the sovereignty of the homeland, managed to defeat many of the policies designed to subjugate the workers.

The meeting is expected to end with the drafting of a document to be submitted to the consideration of the executive headed by Luis Arce and David Choquehuanca.