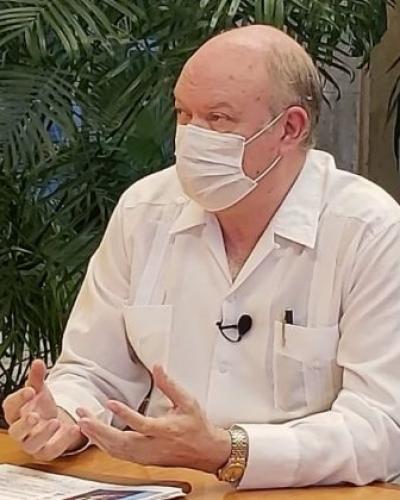 Havana, April 27 (RHC)-- The Cuban Ministers of Public Health of Foreign Trade and Investment along with the Deputy Minister of Health in charge of international cooperation appeared on the prime time TV program La Mesa Redonda, The Round Table.

During the program, Rodrigo Malmierca, Minister of Foreign Trade and Foreign Investment, said that a global economic contraction is expected following the pandemic.  He noted that the World Trade Organization (WTO) has predicted a contraction of between 13 and 32 percent in 2020, while foreign investment is estimated to decline this year and next year by 30 to 40 percent.

The Executive Secretary of the Economic Commission for Latin America and the Caribbean (ECLAC), Alicia Barcena, has also referred to a contraction of the Gross Domestic Product in the region this year, compared to the Great Depression of the 1930s.

The minister recalled that Latin America and the Caribbean is an unequal region from the point of view of income, so this crisis is expected to influence fundamentally the indicators of poverty and food.  And he emphasized that the U.S. economic blockade of the island is the main obstacle to the development of Cuba.

Cuba presents a different situation because we are a socialist country and the people are the focus of our government's attention, said Malmierca, and he reiterated that "no one will be left helpless, although as a result of the pandemic, there will be effects."

Malmierca said that it is shameful how, in this health situation generated by the new coronavirus, the U.S. government "tries to distort reality, and suggests that they export food to Cuba, which is true, but they don't talk about the onerous conditions in which they do it.

According to the head of the Mincex, Cuba must pay in advance and operate with shipping companies authorized by them exclusively.  In the case of medicines, he added that the import-export company MediCuba has made it clear that it is a blatant lie that the U.S. exports medicines to the Caribbean island, when in fact it is the opposite: "They have created difficulties for us to acquire the necessary resources to face not only this pandemic, but all the challenges of economic and social development."