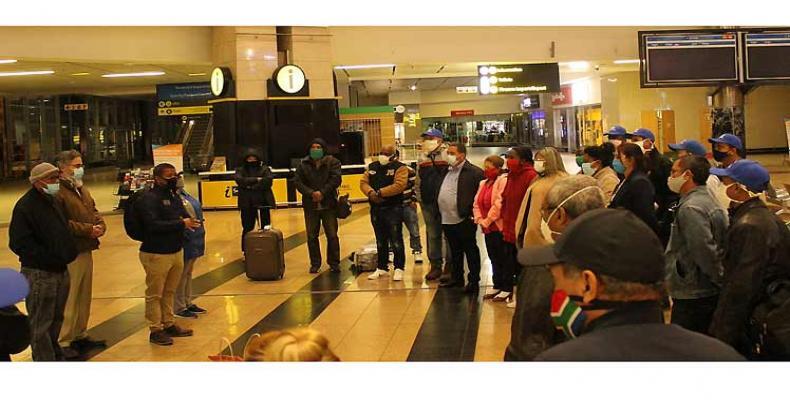 Pretoria, August 19 (RHC)-- A brigade of 23 Cuban specialists in water supply and sanitation issues is in South Africa to help the country with the sensitive issue of water security.

Their arrival materializes the implementation of the new bilateral agreement on the subject signed in February 2020, explained Rodolfo Benítez Verson, Cuba's ambassador to that nation, during the reception of the group of engineers.

The joint projects in this area, said the diplomat, are now being resumed after a brief interruption, marked also by the delay in travel due to the restrictive health measures established in both nations because of the COVID-19 pandemic.

In this context, revealed Benítez Verson, the South African government has highlighted the importance of the presence of these Cuban experts so that they also support from their specialties the national efforts to confront the pandemic.

South Africa, he explained, has few water resources; most of the water consumed is even imported (from Lesotho).  Because of this, he added, the country needs large water infrastructure projects that it does not yet have, and that is a field in which Cuban engineers will support.

This will allow key facilities in the face of the pandemic, such as hospitals and other health facilities, he said, as well as schools and communities, to have a stable and reliable water supply.

According to Cuba's National Institute of Water Resources, for the current stage of collaboration with South Africa, a novel aspect is the integration of Cuban specialists into the management of South Africa's Ministry of Water and Sanitation.

When the new agreement was signed at the beginning of 2020, the ambassador highlighted how the understanding reflects the vibrant and continuous expansion of bilateral cooperation, which is also expressed in sectors such as health, education, construction and culture, among others.

The diplomat reminded that bilateral cooperation between Cuba and South Africa is for the benefit of both peoples, it does not seek prosperity for a few or economic advantages, but is "a genuine example of South-South cooperation."