Cuba advocates multilateralism at the UN and rejects coercive measures 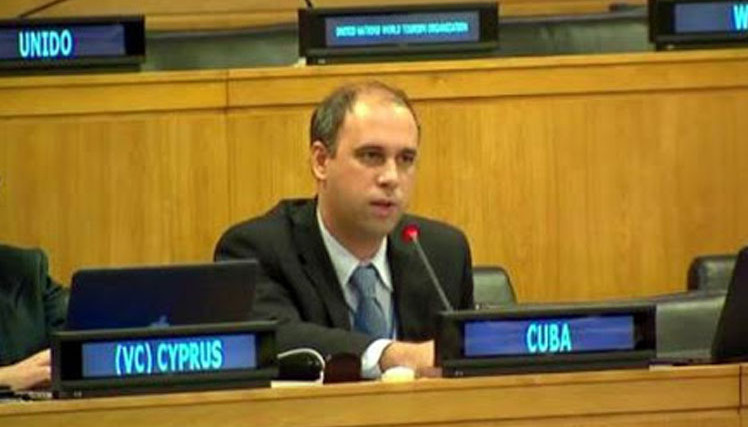 United Nations, October 10 (RHC)-- Cuba has emphasized the importance of multilateralism and the role of the United Nations to support the development of the countries of the south, and rejected unilateral coercive measures, such as the U.S. blockade.

The second secretary of the island's Mission to the United Nations, Juan Miguel Gonzalez, spoke during in the Second Committee of the General Assembly.  He said that at this time, a transparent, open, non-discriminatory and inclusive multilateral system is urgently needed.

"In a pandemic, unequal, asymmetrically interconnected and interdependent world, which faces growing challenges to the current multilateral order, multilateralism and the role of the United Nations in promoting development is more relevant than ever," he said.

Likewise, the Cuban diplomat rejected the unilateral, protectionist and exclusionary actions of a few States, which defend strictly national interests and weaken and reduce the existing multilateral framework and institutions.

All this is to the detriment of global and collective solutions to the challenges facing humanity, he stressed.  Cuba is working for its development under the unjust and criminal blockade of the U.S., intensified with the activation of Title III of the Helms-Burton Law and with new measures implemented this year, several of them in the context of the COVID-19 pandemic.

In addition to these sanctions against the island, there is a voracious campaign by Washington and its allies to discredit the Cuban medical brigades, whose work is demanded and recognized internationally, he denounced.

Such actions not only harm Cuba, he stressed, but also other peoples of the world who are today urged to express solidarity and not selfishness and petty interests.

On behalf of Cuba, Gonzalez reiterated the need and validity of the postulates for a New International Economic Order, based on equity, sovereign equality, common benefit and cooperation among all the States, which corrects the current inequalities and guarantees a fair economic and social development.

The development gap separating the North from the South continues to grow, he stressed, and is now amplified by structural differences in multiple areas that make it impossible for many of these nations to climb to higher levels.