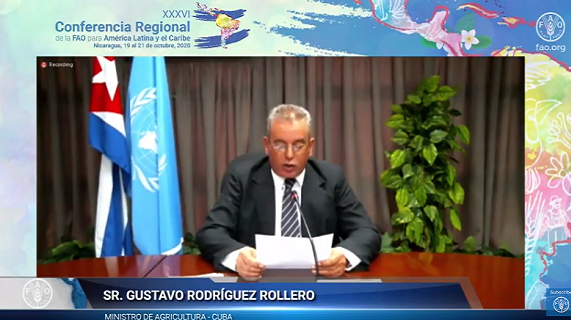 Havana, October 20 (RHC)-- The Minister of Agriculture of Cuba, Gustavo Rodríguez Rollero, spoke at the 36th FAO Regional Conference for Latin America and the Caribbean, which is being held online from 19-21 October,  hosted by Nicaragua.

In his remarks,  Rodriguez stressed that Cuba is working intensively in the approval of public policies to develop food production. He explained that 24 actions or measures have just been approved for the agricultural sector as part of the Economic and Social Strategy approved to face the crisis caused by the COVID-19 pandemic.

The Minister expressed appreciation for FAO's support to the Cuban government in the design of the Food Sovereignty and Nutritional Education d Plan, approved by the Council of Ministers last July, and said that work is being done on the preparation of a bill that would legally support this strategic task.

According to the Minister, this Plan lays the foundations for more accelerated development of Local Food Systems and Territorial Development.

He also pointed out that Cuba is developing a program of the national production of animal food to replace the imports of fodder and raw materials to achieve sustainability of the livestock production of the island.