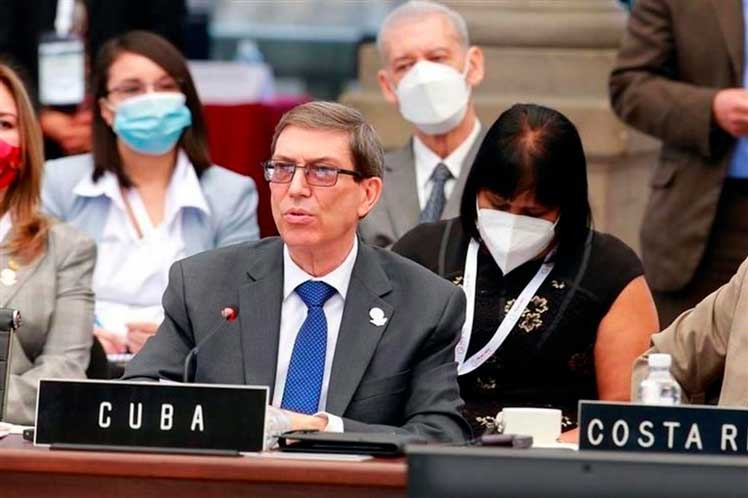 Havana, July 24 (RHC)--Foreign Minister Bruno Rodríguez described as genocidal the economic, commercial, and financial blockade of the United States against Cuba and its intensification during the Covid-19 pandemic.

Speaking at the 21st Meeting of Foreign Ministers of the Community of Latin American and Caribbean States (CELAC), Rodriguez said that the government of Donald Trump deliberately and cruelly identified this health emergency as an opportunity to reinforce the siege and aggression against his nation.

He pointed out that this policy is applied without variations by the current U.S. administration of Democrat Joe Biden and threatens the integrity of the Cuban people.

In the meeting, preparatory to the summit of that intergovernmental mechanism scheduled for next September, Rodriguez referred to the destabilization attempts promoted from abroad against his country through social networks.

The campaign to discredit Cuba, financed with federal funds by the United States and the Florida government, used a toxic platform to incite disorder and violence that would justify an intervention,  with lies and distortions, he denounced.

He also pointed out that a superpower cannot be allowed to destroy small countries to impose its domination.

At the meeting, the Cuban Foreign Minister reiterated the commitment of the Caribbean island to regional integration and to the declaration of Latin America and the Caribbean as a Zone of Peace and expressed his gratitude for the many expressions of support, solidarity, and condemnation of the blockade.

The Cuban people and its government will defend the Socialist State of Law and Social Justice and will persist in building an independent, sovereign, democratic, prosperous and sustainable nation, he said.

Mexico holds the pro tempore presidency of this intergovernmental mechanism for dialogue and political coordination that brings together the 33 countries of Latin America and the Caribbean.