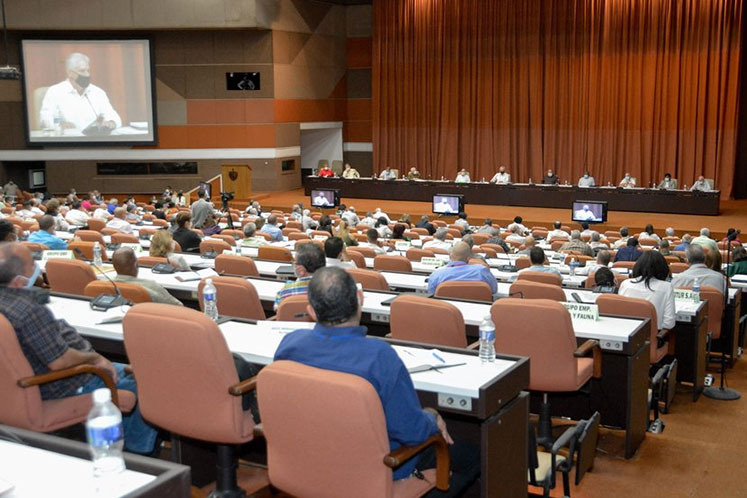 Havana, November 17 (RHC)--Cuba's president, Miguel Díaz-Canel, on Tuesday called on the business system to increase innovation to provide solutions to the country's most pressing problems.

During a meeting with the Boards of Government, the State's representative body in the control of the State's business management, the president insisted that the country has the conditions to strengthen the interconnections between the knowledge sector, the productive and service sectors, and the government's activity.

Díaz-Canel considered that inertia persists in renovating proposals to boost the national economy, despite the 43 measures to strengthen the state-owned company sector.

"Those who lead the companies and the Boards of Government must identify the obstacles to be eliminated and seek motivations to transform the sector, which are key to meeting the Sustainable Development Objectives, the Vision of the Nation and the National Plan for Economic and Social Development until 2030," he said.

The dignitary commented that several public policies, norms, and resolutions had been approved in the last two years. They favor the science, technology, and innovation system, but other elements are still necessary to promote it.

Diaz-Canel recalled that it is not always a matter of creating new knowledge but taking advantage of research that has already been done and is currently unused.

He stressed that the mode of action should be the one applied during the Covid-19 pandemic, where the constant exchange with scientists and experts resulted in more robust protocols for the care of patients and better indicators in the management of the epidemic.

"More than 700 investigations were generated in this period, as well as 13 biopharmaceuticals and four vaccine candidates," he said, adding that the experience is now being extended to the food sovereignty program.

When analyzing these issues, which are being directly addressed by the government, the president referred to the contradiction that arises in Cuba: on the one hand, he said, we are an underdeveloped country with a high human development index, recognized in the latest UNDP report, which allows us to occupy 72nd place internationally, especially because of the social work and public policies that the Revolution has developed.

However, when we look at the world innovation ranking, where several international organizations participate, among them the World Intellectual Property Organization, about 143 countries appear. Cuba