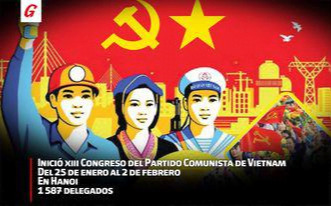 The letter expresses the conviction that the event's agreements and resolutions will consolidate the construction of a developed socialist society.

The text recalls the historic meeting between Army General Raul Castro Ruz and President Ho Chi Minh, "whose fraternal embrace consolidated the special feeling that unites the two parties and has been transmitted to the new generations."

This year will mark the 55th anniversary of that singular moment, and Cuba will celebrate it, the letter said.

The Cuban Communist Party ratified its gratitude to the Communist Party of Vietnam for its faithful and unwavering support, "particularly in the struggle against the economic, commercial and financial blockade imposed by the government of the United States against Cuba and the commitment to continue consolidating the exemplary relations of friendship, cooperation, and brotherhood".