Caravans in the U.S. and Canada reject Washington's blockade on Cuba 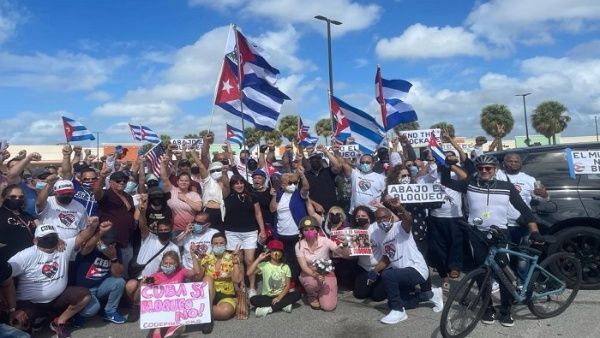 Participants in caravan against the US blockade on Cuba. Miami, February 28, 2021.

Washington, February 28 (RHC)-- Associations of Cubans living in Canada and the United States demanded on Sunday the lifting of the U.S. economic, commercial and financial blockade against Cuba.

Yuri Pedraza, president of the Cuban Community in Canada, in expressing his opposition to U.S. policy, declared that the blockade is the most genocidal way of attacking a people, the most hypocritical way of trying to overthrow a system, and the most cowardly way of trying to make someone change his or her way of being.

In  the United States the eighth edition of the 'Bridges of Love' caravans took place in favor of eliminating the economic sanctions imposed on Cuba and for Cuban families, initiated last July 26, from the call on social networks of the Cuban youtuber 'Protestón Cubano'.

Protesters in cities of both nations called to 'build bridges of love between the peoples of Cuba and the United States', in continuity with the caravans organized for several years and carried out in Miami by the Alianza Martiana Coalition.

“I demand the United States government to cease the criminal blockade against my people, which constitutes a genocide of more than 60 years, which does not allow my Cuban brothers and sisters to develop in peace and tranquility, declared Alina Velázquez,” member of the José Martí Cultural Association.

On January 31, hundreds of Cubans living in the United States and friends of Cuba took to the streets on bicycles and cars in Miami, New York, Seattle, and Los Angeles to oppose the blockade and pay homage José Martí on the 168th anniversary of his birth.

In addition to demanding an end to Washington's extraterritorial policy that has affected the island, its economy, and its people for more than 60 years, the caravanists supported the work of Cuban doctors and backed international petitions for the nomination of the members of the Henry Reeve Cuban Medical Brigades for the Nobel Peace Prize.