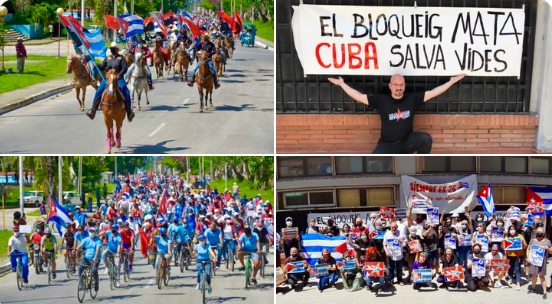 Havana, May 30 (RHC)—Cuban authorities expressed appreciation for the numerous messages of support and participation in caravans, bicycle rides and rallies around the world demanding the ending of the decades-old U.S. blockade against the Caribbean island.

On Twitter, President Miguel Diaz-Canel stated that Bridges of Love for Cuba were once again built in dozens of cities worldwide. The grateful homeland joined all those gestures with a caravan in Ciego de Avila province, a regatta in Cienfuegos, and a sky filled with pigeons in Havana.

While the injustice prevails, we will continue demanding the end of the blockade, said Diaz Canel.

"Our appreciation to all the Cubans residing abroad, the solidarity movements, and to all those who demanded the end of the blockade," said Rodriguez.

The main coordinator of the solidarity project Puentes de Amor,  Bridges of Love, Carlos Lazo, called on Sunday for another world caravan on June 20 against the economic blockade imposed on Cuba by the United States for the last six decades.

In a message on Twitter, the Cuban-American activist pointed out that this day will take place just three days before the U.N. General Assembly's vote on the draft resolution of the Caribbean island in rejection of these unilateral sanctions.

In a video he posted at the end of the caravan, Lazo thanked the solidarity people from Africa, Asia, Europe, Australia, America, and other regions who participated in this solidarity action against the U.S. unilateral siege, whose main burden falls on Cuban families.

This weekend people from all over the world demanded the end of the #USBlockade. They have have vowed to return to the streets next June 20. #UnblockCuba @RHC_English @Radiocubana pic.twitter.com/1m3JKzj78M