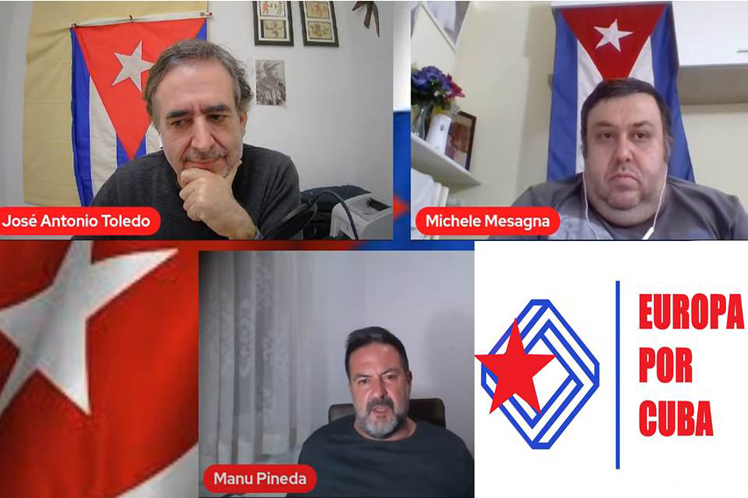 Paris, March 1  (RHC)-- Spanish MEP Manu Pineda repudiated on Sunday the economic, commercial and financial blockade of the United States against Cuba and the media campaigns aimed at demonizing the island, which he described as dirty.

In his participation in the Europe for Cuba channel, the member of the Left in the European Parliament pointed out that the Caribbean country faces the Covid-19 pandemic in a scenario aggravated by the siege imposed by Washington for six decades, intensified by the administration of the now-former President Donald Trump.

Pineda recalled the large number of measures enacted during the last four years to suffocate the island and their unilateral and extraterritorial nature, as well as the challenge they represent to international legality.

The inclusion of Cuba in the list of countries sponsoring terrorism 'is the last little gift that the infamous Trump has left here,' which will hinder or slow down a softening of the blockade, if in the new U.S. administration there were a political will to do so, he denounced.

The vice-president of the Group of Friendship and Solidarity with Cuba of the European Parliament in the 9th Legislature expressed his expectation that Joe Biden will work to resume the rapprochement between Washington and Havana and that the European Union will accompany this path.

In addition to the fight against the blockade, he considered it a priority of the Group to offer a more objective vision on Cuba in the face of what he called intoxication campaigns.

Pineda rejected that some in the European Parliament, particularly Spanish right-wing members, are part of the anti-Cuban crusade.

They organize events and campaigns to tarnish Cuba's image. The moment someone becomes an anti-Cuban activist, they parade him around and talk about dictatorship and violation of human rights, when those who have visited Cuba know that the opposite is true, he said.

The MEP insisted that the Caribbean country is an example of solidarity by not sending soldiers, bombs, or military planes to other nations, only doctors and teachers.

In this regard, he pointed out that the Friendship and Solidarity Group supported the petition to recognize with the Nobel Peace Prize the Henry Reeve medical brigades for their help in the fight against Covid-19 in dozens of countries and territories, among them the European countries of Andorra and Italy.