Diaz-Canel: Economic progress is essential to address the ideological battle and subversion 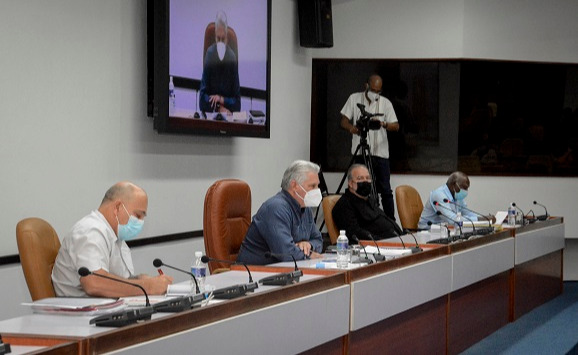 Havana, May 11 (RHC)-The implementation and follow-up to the agreements emanating from the recent 8th Congress of the Communist Party is a priority of the Cuban government for the coming months, said the First Secretary of the Central Committee of the political organization and President of the Republic, Miguel Diaz-Canel Bermudez.

In the monthly meeting with the governors, the President insisted on the need to analyze and debate the different issues, both in the ideological battle and in the economy.

"The best way for us to face the ideological battle and the confrontation of subversion is also by strengthening our economy, the work in the communities, the local work, seeking the greatest possible satisfaction of our people," said the President.

Regarding the vaccination that has begun in the country of health personnel and at-risk groups with the vaccine candidates against COVID-19 approved by the Ministry of Public Health, the President called on the leaders to devote themselves body and soul to ensure the success of that health intervention.

Diaz-Canel affirmed that the intervention is very well-argued from the scientific and legal point of view and recalled that the island is one of the few countries that can carry out this vaccination in the world, with its vaccine candidates that in the different phases of clinical trials are showing, according to the data collected, safety, effectiveness, and quality.

The President pointed out that before going to a vaccination campaign, Phase III must be concluded, and its data must be processed and registered.

For Cubans, he affirmed, the successful conclusion of all these processes would have an enormous meaning because they would express unity, victory and what the talent of a small people can obtain, despite being constantly blocked and attacked.

"It would be a forceful response to all the viciousness with which the imperial policy has tried to impose itself concerning Cuba amid this situation. And it would open great hopes not only for Cubans but also for the world, based on how we are willing to cooperate with humanity with our scientific results, "said the Cuban leader.