President Díaz-Canel evaluates the progress of priority programs in Cuba 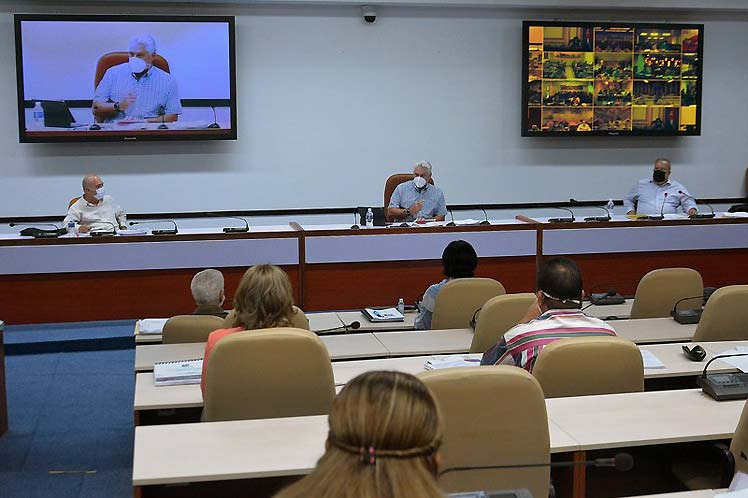 In the meeting, President Miguel Diaz-Canel evaluated some of the country's priority programs.

Havana, June 7 (RHC) --Cuban President Miguel Díaz-Canel evaluated on Monday the progress of priority programs such as housing and food production and the epidemiological situation regarding Covid-19.

In a virtual meeting with authorities from all the provinces, the Isle of Youth Special Municipality, and representatives of the Government and the Communist Party, the President was informed that at the end of May, 7,389 houses had been completed through state plans, subsidies, and citizen's efforts.

According to a national television report, this represents 17 percent of the more than 44,600 housing units planned for this year.

During a review of the food sovereignty and territorial self-sufficiency program, particularly regarding the spring campaign of various crops, it was reported that the plan is 82 percent fulfilled.

On the other hand, the Minister of Public Health, José Ángel Portal, recalled that last May, the Caribbean nation recorded the highest number for a month of daily infections with Covid-19, of patients in serious or critical conditions and deaths.

Regarding the immunization strategy against the disease in at-risk groups and territories, he added that 1,745,588 people have already received at least one dose of the Cuban vaccine candidates Soberana 02 and Abdala, representing 15.5 percent of the population.

Another issue discussed was infant mortality in the island territory, which has increased to 6.7 per 100,000 live births.

Among that indicators' causes, participants mentioned the lack of demand and control in the obstetrics and neonatology services of health institutions, the delay in the admission of pregnant women to maternity homes, and the poor construction conditions of the latter.

The introduction of new commercial techniques and the need to be prepared and alert to the possible increase in rainfall during the hurricane season were also discussed.

Towards the end of the meeting, and regarding the difficult times Cuba is going through, President Díaz-Canel shared his certainty that Cubans will get ahead and that they will be able to "do it through through their efforts, with their talent.

"We cannot let ourselves be crushed by adversities. We cannot be discouraged or disheartened," the Cuban leader stressed.

He recalled that "complex and new situations require doing things differently" and that at this moment, Cuba is "resisting creatively, to continue moving forward, in order not to remain stopped in time.