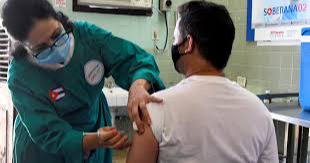 Havana, July 16 (RHC)--Health authorities announced on Friday that Cuba surpassed the figure of 2 million people who have been fully vaccinated with the anti-COVID injectables developed by the island's scientific community.

International media confirm that Cuba is currently the nation with the highest daily vaccination rate per 100 inhabitants.

The Ministry of Public Health anticipates that by the end of 2021, all the island people will be vaccinated. At the close of July 14, 7,900,125 doses of Cuban vaccines had already been administered, which means that at least 3,220,481 people have received at least one dose of one of the vaccines Sobernana 02 and Abdala.