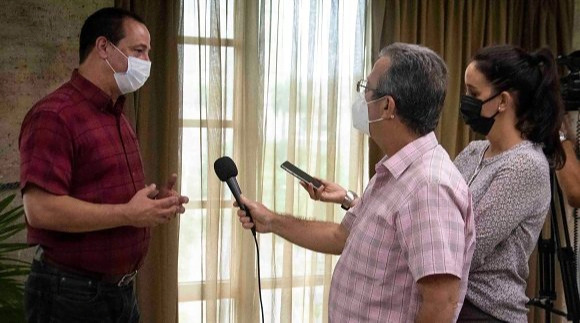 Havana, August  15 (RHC)-- Public Health Minister José Angel Portal Miranda announced that the island's main oxygen plant is out of service and that efforts are underway to mitigate the effects caused by the low coverage of medical oxygen.

In statements to the press on Sunday, Portal said that the plant's breakdown has limited the gas availability and has prompted the Government to establish a National Command Post, with provincial subsidiaries to seek prompt solutions and mitigate the impact this problem can generate.

President Miguel Diaz-Canel and Prime Minister Manuel Marrero led on Sunday a meeting of that body, which was held with the participation via video conferences of all the provinces and the Isle of Youth.

He explained that several decisions had been made in recent days to alleviate this situation". They are trying to expedite as quickly as possible, he assured, the solution for the plant. In addition, oxygen concentrators have been imported, which can produce oxygen at low volume 24 hours a day and can be used for up to three patients simultaneously.

The Minister of Health also pointed out that "there are plants of other agencies that have also been made available for oxygen production, among them those of the Revolutionary Armed Forces."

Portal once again acknowledged on behalf of the country's leadership, all that has been done by the healthcare professionals on the front line,  the specialists, the nurses, the technologists who are directly involved in patient care and who have had to look for ways to alleviate this complex situation Cuba is going through.