The president stressed that this thinker, Unesco's José Martí Prize winner, has had an enlightened and contributive life, which deserves to be celebrated throughout Latin America. Likewise, he pointed out that Cuba is grateful for his transcendent acts in the defense of its sovereignty.

"It turns 100 years old the Mexican thinker Pablo González Casanova, José Martí Prize of #UNESCO. His enlightened and contributive life deserves to be celebrated throughout #OurAmerica. #Cuba thanks him for transcendent acts in the defense of our sovereignty. Congratulations," wrote the head of state.

"On the occasion of his 100th birthday, our warmest congratulations to Pablo González Casanova, eminent Latin American intellectual, founder of the Network in Defense of Humanity and tireless anti-imperialist fighter of genuine Marti's vocation.  An embrace to the faithful friend of Cuba," tweeted Rodríguez Parrilla.

Pablo González Casanova, born in 1922, is a Mexican lawyer, sociologist and critic, who has been a close friend of Cuba. From 1970 to 1972 he was rector of the Autonomous University of Mexico, and was awarded the National Prize for Social Sciences in 1984.   That same year he was recognized as Emeritus Researcher and Emeritus Professor of the same university, being the only university student to receive both distinctions simultaneously.

In 2003 Unesco awarded him the José Martí International Prize for his defense of the identity of the indigenous peoples of Latin America.
Honorary member of the Mexican Academy of Language, among his most important works are "Misoneísmo y mod 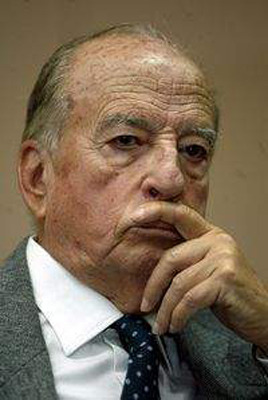