Diaz-Canel  thanks Kim Jong Un for his support to Cuba 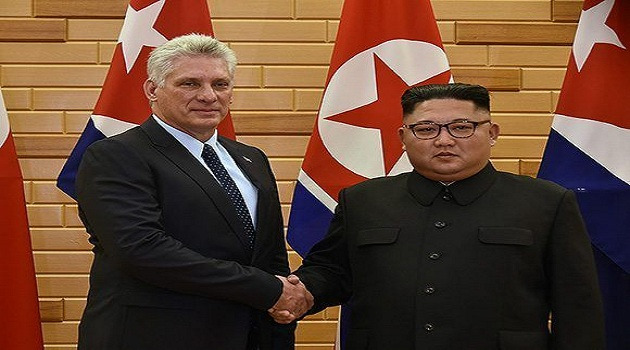 Havana, Feb 14 (RHC) Cuban President Miguel Diaz-Canel thanked the Secretary-General of the Workers' Party of the Democratic People's Republic of Korea, Kim Jong Un, for his solidarity and congratulations on the 63rd anniversary of the Revolution.

In a letter released Monday, the Cuban leader reiterated the will to strengthen further "the close ties of friendship, cooperation and solidarity between our countries, forged by the Great Leader Kim Il Sung and Commander-in-Chief Fidel Castro."

"Please receive the assurances of my highest consideration and esteem," concludes the message sent by Diaz-Canel.

Previously, Kim Jong sent a letter to Díaz-Canel in which he highlighted the more than six decades of socialist construction on the island, ratified his full support and firm solidarity, as well as his confidence in the continuity of bilateral friendly relations.

Precisely, political and social institutions of the Caribbean nation remembered in Havana on Monday, the 80th anniversary of the birth of the leader of the Democratic People's Republic of Korea (DPRK), Kim Jong Il.

At the DPRK diplomatic mission headquarters in Havana, Ambassador Ma Chol Su thanked the Cuban organizations and people for their expressions of solidarity and friendship on the occasion of such an important date for the Korean people.