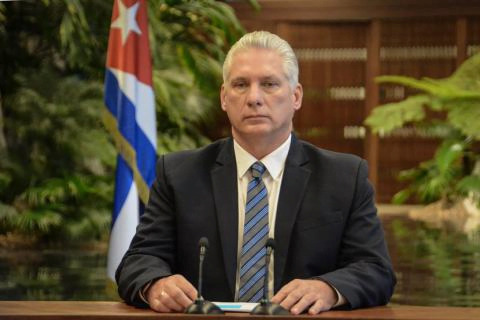 Havana, February 16 (RHC)--President Miguel Díaz-Canel said Wednesday that Cuba would continue to provide unconditional solidarity aid to Haiti while speaking virtually at a forum for assistance to that country.

He added that all countries have a moral obligation to provide substantial and selfless cooperation to Haiti for its reconstruction and boost its sustainable development.

From the beginning of Cuba's medical collaboration in the neighboring country in 1998 until December 2021, the Cuban leader noted that more than 6,000 Cuban health personnel have been deployed there, performing more than 36 million consultations, more than 721,000 surgical procedures, thousands of deliveries and have saved numerous lives.

He said that in August 2021, a brigade of the Henry Reeve International Contingent was added to the 253 Cuban health professionals already working in this sister country to support the health care workers in the areas most affected by the earthquake.

"We do not cite these data to boast about our cooperation. Nothing could be further from Marti's preaching and Fidel's idea of internationalism and solidarity. We want to put on record our awareness of the severe problems afflicting sister Haiti. "

Diaz-Canel reiterated the willingness to support the vaccination campaign against COVID-19 in Haiti and that Havana will provide advice and vaccines developed by its pharmaceutical industry.

The International Conference for Financing the Reconstruction of the Southern Peninsula of Haiti is being held to support a region that was devastated by a 7.2 magnitude earthquake last August 14, which caused more than 2,200 deaths, 12,700 injured, and affected almost half of the population in the region, according to official data.

Read full address by President Miguel Diaz-Canel at the International Conference for the Financing of the Reconstruction of the Southern Peninsula of Haiti. February 16, 2022 here